[Spoiler] "The Sun and The Moon" Yeo Jin-goo's excellent performance 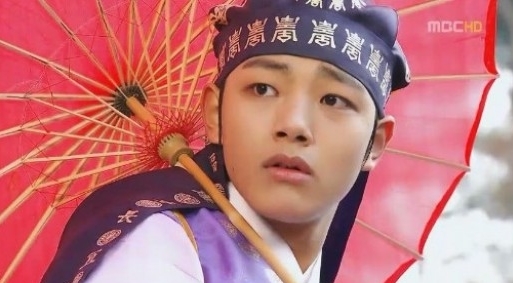 Yeo Jin-goo has taken on the role of the younger Lee Hwon (Kim Soo-hyun) in the MBC drama "The Sun and the Moon".

Young Lee Hwon tried to jump the fence of the palace but was distracted by young Yeon-woo, who was running around after a butterfly. Lee Hwon lost his balance and fell on top of Yeon-woo.

Continuously, he managed to carry out the serious role of a prince as well as other sides of his character.

Netizens said, "He is so good at this", "Yeo Jin-goo has improved a lot", "I couldn't take my eyes off the drama" and more.

"The Sun and the Moon" is based on a bestseller by Jeong Eun-gwol, who also wrote "Sungkyunkwan Scandal". It is a fantasy romance about Yeon-woo (Han Ga-in), who was chosen as princess but has to live her life as a shaman due to unfortunate events, and imaginary king Lee Hwon (Kim Soo-hyun).

"[Spoiler] "The Sun and The Moon" Yeo Jin-goo's excellent performance"
by HanCinema is licensed under a Creative Commons Attribution-Share Alike 3.0 Unported License.
Based on a work from this source