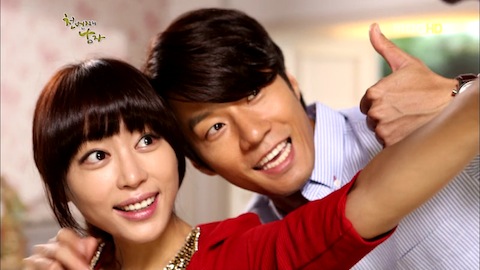 This episode had a lot crammed into it and moved a little fast for me. But it's a television show and only eight episodes at that, so I'll cut it some slack. I really love the family element that it has going, but the romance has been put aside for the mystery that is Gu Mi-jin. I hope we bring back the romance in the last episode because, well, that's why Mi-jin is willing to die, right?

Oh yes, ratings went up to 4.5% according to AGB Nielsen Nationwide.

Episode 13 - Are you happy because you're a fox?

Mi-jin wakes up the next morning and tries to remember The Recipe that Jang-geum taught her. Downstairs Eung-suk makes her French toast. She is disappointed by the lack of meat. She needs meat for breakfast but he says that this is all there is today - they need to make room for the king's royal dish.

Oooh, them's fighting words. She takes up the challenge.

Mi-mo is running (and she looks really funny running). Apparently she's left poor Woo-hyun behind and is annoyed that he followed her.  He's annoyed she didn't remember their promise to exercise together, but she doesn't really care - he started liking her by himself.  Finally fed up, he stops her by yanking off her headphones and asks how much more he has to like her? Taking a moment to think, she replies that he has to be willing to die.

I guess Mi-jin's willingness to sacrifice her life for love has really jarred her.

Woo-hyun looks like he's having trouble swallowing that statement.

Mi-jin sniffs out Mi-mo and sits her down to ask for The Recipe that they learned from Jang-geum.

Flash back to the royal kitchen where Jang-geum asks Mi-jin and Mi-mo to make a steamed dish with prawns even though they've never done it before. They are tasked find the best ingredients to accompany prawns. Jang-geum is quite the peculiar character in speech and body language. She also prefers Mi-jin to Mi-mo, which elicits the funniest facial reactions from poor, little Mi-mo.

Mi-jin's ingredients are accepted with a pleased smile while Mi-mo's get dumped out. Finally, Mi-mo can't stand it and says that Mi-jin cheated, she saw how this was made before. Jang-geum orders Mi-mo to clean instead of cook and Mi-jin jumps to her sister's defense, saying Mi-mo was correct. Jang-geum isn't pleased, but gives Mi-jin another chance - try to make the sauce because she won't know the ingredients just by looking.

As Mi-jin prepares, it jumps to the present where she does the same in front of her very curious audience of two. When Chef Seo tries to taste it, she stops him and another flashback explains that Jang-geum taught not to taste it but to do it by feel. Apparently tasting ruins the food.

In the present, Seo comments that trusting one's fingers over tasting is something only top chefs do.

Eung-suk tries the dish and does not look very impressed. Seo chides him and tries the dish. He starts crying and then praises it. She's happy about that but is concerned about Eung-suk's reaction.

She gazes at him and remembers that he has an illness. If it's not in his body, where is it?

My take on this scene is that the taste shocks Eung-suk and the facts that start adding up aren't equaling a conclusion he can readily believe. That and he may not be feeling well. In the first episode, Eung-suk stared at a jar of salt forlornly. Perhaps the tumor is affecting his taste buds?

We find Eung-suk at the hospital where he asks about a terminal patient that needs men. Hahaha! The doctor thinks it's a coping mechanism or perhaps despair. When Eung-suk continues to question, the doctor urges him to focus on himself.

Eung-suk asks how long he's going to live, a question he's never asked before. He was calm when diagnosed with a terminal brain tumor but he wants to live now. The doctor says he can't promise anything.

Mi-sun and Mi-mo talk about Mi-jin. Mi-mo has cut her hair and it flips out like a '50s housewife 'do. They're talking about Mi-jin and the fact that she won't give up her belief for her last liver. Mi-mo then asks if there is a man who'd give up his liver for her and when Mi-sun says "yes", Mi-mo teases her that she's lying. Mi-sun shoots back that men just hit on Mi-mo. They make a bet and then Mi-mo assures Mi-sun that Mi-jin will take any ol' liver when it comes down to it.

"[Spoiler] "The Thousandth Man": Episode 7 Recap"
by HanCinema is licensed under a Creative Commons Attribution-Share Alike 3.0 Unported License.
Based on a work from this source