[Spoiler] "Uncontrollably Fond" Kim Woo-bin and Suzy hit it off

The first episode of the new KBS 2TV drama "Uncontrollably Fond" showed Sin Joon-yeong (Kim Woo-bin) being given only a few months to live and No-eul (Suzy) who wanted to cover a story on him.

The start was strong. Joon-yeong was getting married with Yuna (Lee Elijah) when a mob crashed his wedding and tried to hurt him. However, this was all part of the act.

According to the script, Joon-yeong dies in the end but he changed his mind and ordered the director to change the ending.

However, he only acts this way because he knows he's going to die. He has a year to live so although he tries to deny it, he arranges his surroundings.

On the other hand, No-eul was fired from her company for the reason that she took bribe in the middle of reporting illegal discharging of waste water. She then ran into some people who were planning a documentary on Sin Joon-yeong and declared that she would convince the star who refused to do it.

Of course, Joon-yeong refused. No-eul got into his car the next morning and he speeded to give her a scare.

In the end, he threw a cheque at No-eul who ended up throwing up and told her they were never to meet again. No-eul lay down in the middle of the street and swore at him. 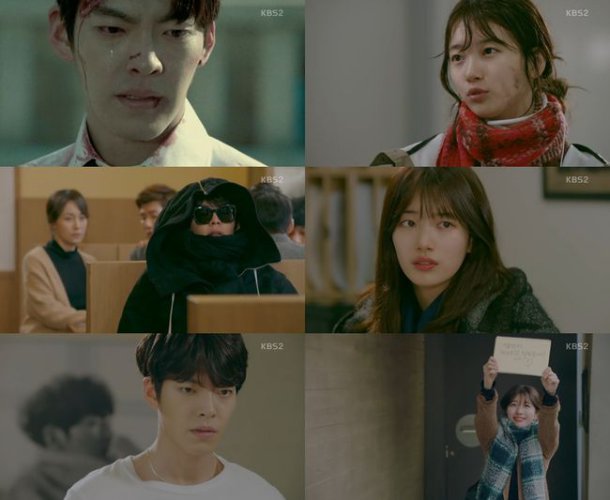 "[Spoiler] "Uncontrollably Fond" Kim Woo-bin and Suzy hit it off"
by HanCinema is licensed under a Creative Commons Attribution-Share Alike 3.0 Unported License.
Based on a work from this source