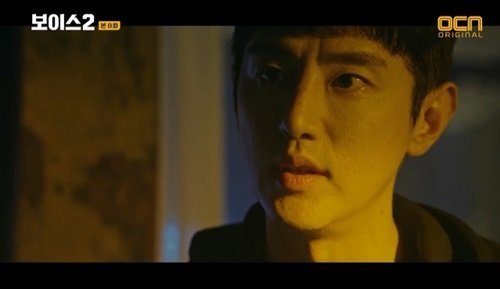 On the latest episode of the OCN drama "Voice 2", Bang Je-soo (Kwon Yool) collected the tongue of Hwang Mal-soon, a chatty neighbor.

Hwang Mal-soon had asked him if she could keep her sofa in his basement for a week, but he refused so she bashed him and his mother. Bang Je-soo decided to hurt her and he lured her into his basement saying he'd take her sofa for a week.

Hwang Mal-soon said, "I was almost disappointed in you. Can I help myself to a glass of water?" She opened the fridge and inside were fingers, hands, and other body parts. She saw her name written on a box and turned pale.

Bang Je-soo said, "There was a woman who was called a chatterbox and liked to talk bad things about people and over exaggerate stories. Village people asked her why she spread such rumors and she asked what was wrong about telling fun stories. Funny huh? The problem is this; what if I was one of the village people? What would I do?"

"I wouldn't say it any other way and just teach her a lesson. If I cut your tongue, you won't be able to spread rumors right?" He then put her tongue in his box and Hwang Mal-soon was found on a beach with her tongue cut out.

"[Spoiler] "Voice 2" Kwon Yool Collects the Tongue of a Chatty Neighbor"
by HanCinema is licensed under a Creative Commons Attribution-Share Alike 3.0 Unported License.
Based on a work from this source