On the final episode of the SBS drama "You're Surrounded", Eun Dae-goo (Lee Seung-gi) and Eo Soo-seon (Go Ara) were taken to a warehouse by Yoo Moon-bae (Jung Dong-hwan) and his men.

Eun Dae-goo tried to save Eo Soo-seon and said, "I will die I my own hands but let her go". Jung Dong-hwan accepted this and a man of his tried to take her out. She yelled towards Eun Dae-goo, "Do you think you're doing this for me? It's not right. I told you not to die in front of me. You shouldn't die in front of me too. I love you".

Eo Soo-seon started crying and so did Eun Dae-goo. She was taken out and Eun Dae-goo told Yoo Moon-bae that everything was being recorded live. He successfully had Yoo Moon-bae arrested. Seo Pan-seok (Cha Seung-won) and his back up came to the rescue.

Eun Dae-goo and Eo Soo-seon were glad they were safe and embraced each other.

A year later, Eo Soo-seon approached a sleeping Eun Dae-goo when he woke up and said, "What are you doing? I caught you in the act". Eo Soo-seon was embarrassed.

Other detectives came into the room and they both hid themselves. They went out and Eun Dae-goo started kissing her. She was shy at first but kissed him back too. 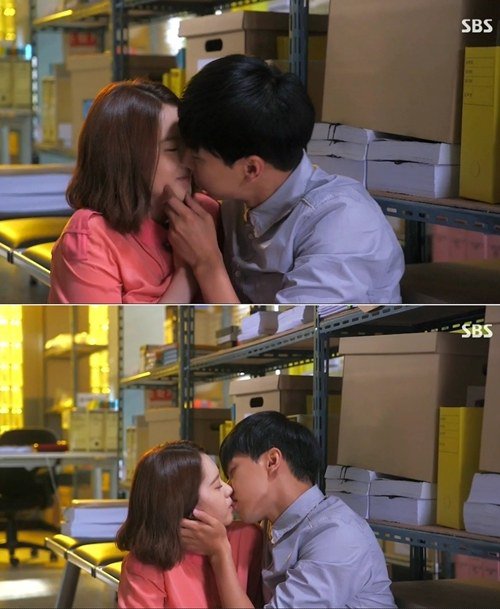 "[Spoiler] "You're Surrounded" Go Ara tries to kiss a sleeping Lee Seung-gi"
by HanCinema is licensed under a Creative Commons Attribution-Share Alike 3.0 Unported License.
Based on a work from this source