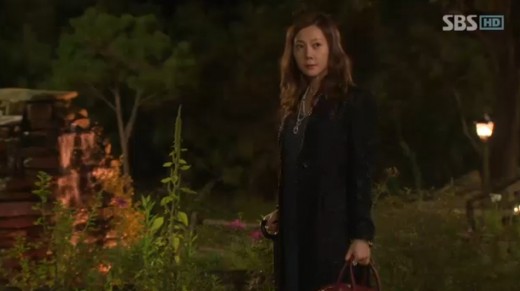 Yum Jung-ah returned to the in-laws on the episode of the SBS drama "My Love, Butterfly Lady" on the 21st.

Nam Na-bi (Yum Jung-ah) lost all of her fortune for being framed as a fraud after her marriage with Jeong-wook (Kim Sung-soo). She planned on getting a house with her mother's lodge money but the lodger ran away and her plans went up in smokes.

Having moved from a hotel to a motel, she met Jeong-wook's father Byeong-ho and found out about Jeong-wook's past. He suggested she joined the in-laws as he thought Jeong-wook showed her their restaurant before he left in means of keeping her tied with them.

Na-bi decided she would live with her in-laws since she had a baby.

Na-bi arrived in front of their restaurant and said to herself, "Roy, I'm here. The place you missed so much. Me and the baby will wait for you here. I love you".

"[Spoiler] Yum Jung-ah joins the in-laws"
by HanCinema is licensed under a Creative Commons Attribution-Share Alike 3.0 Unported License.
Based on a work from this source