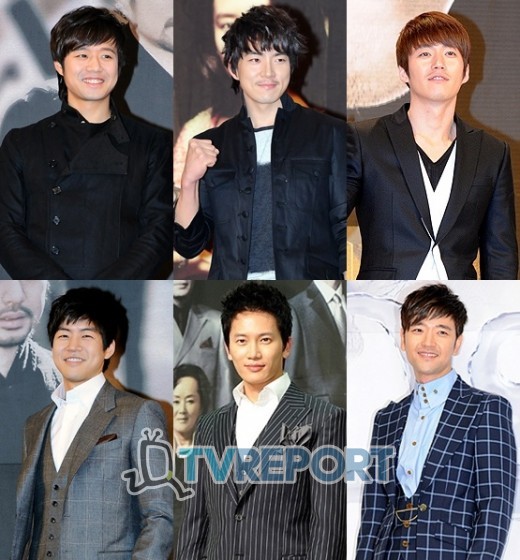 It was literally a wave of women.

For the last two years continuous dramas such as "Queen Seon-deok", "My Wife is aSuperwoman", "Queen of Reversals", "Home Sweet Home", "Flame of Desire", "I Am Legend", "My Princess", ""Daemul – Big Thing" and more have been broadcasted.

Because of the crazy popularity of Go Hyun-jung, Kim Hye-soo, Shin Eun-kyung, Kim Tae-hee, Kim Nam-joo and other actresses, the actors like kwon Sang-woo, Shin Sung-woo, Song Seung-heon, Jung Joon-ho and others had shadows over their faces.

However, spring this year the actors started surfacing. Lee Sang-yoon in MBC TV drama "The Duo" is one.

"The Duo" is about two men who live exchanged lives as an aristocrat and a beggar. The focus itself is on the males.

Chun Jung-myung in the drama is Cheon-doong who was born an aristocrat but grows up in a beggars hut. Lee Sang-yoon is Gwi-dong who grows up in the aristocrats house.

Cheon-doong and Gwi-dong are 'duos' who have a strange love triangle going on between them although they help each other in times of difficulty. They are displaying men's deep friendship and loyalty.

After Ji Sung and Song Il-gook fails to succeed in MBC TV "Kim Soo Ro" and "A Man Called God", they returned with MBC TV "Royal Family" and KBS 2TV "Detectives in Trouble".

Ji Sung is Han Ji-hoon, who overcomes a difficult childhood and becomes a skilled prosecutor in "Royal Family". He is bright and energetic on the outside but has a pain no one knows about.

Song Il-gook is detective Park Se-hyeok in "Detectives in Trouble". He is warm and mild but one who can't stand injustice.

◆ Jang Hyuk and Bae Soo-bin, will they succeed in homerun?

Jang Hyuk and Bae Soo-bin have the common fact that they both succeeded in their previous work, KBS 2TV "The Slave Hunters", SBS TV "Shining Inheritance" and MBC TV "Dong Yi".

This year they both have returned with SBS TV "Midas" and "49 Days". It is looked forward to if they will make the success happen again.

Jang Hyuk is Kim Do-hyeon, a fund manager turned lawyer in "Royal Family". He is a genius lawyer who graduated the Judicial Research and Training Institute with flying colors and handsome, but with the demerit that he is from a family with no roots.

Bae Soo-bin is MBA Kang Min-ho in SBS TV "49 Days" coming soon on the 16th. Bae Soo-bin showed confidence in this drama saying, "It has a warm and strong storyline so I think it will be successful".

"[Spring drama plan] Actresses over the hills... actors counterattack"
by HanCinema is licensed under a Creative Commons Attribution-Share Alike 3.0 Unported License.
Based on a work from this source