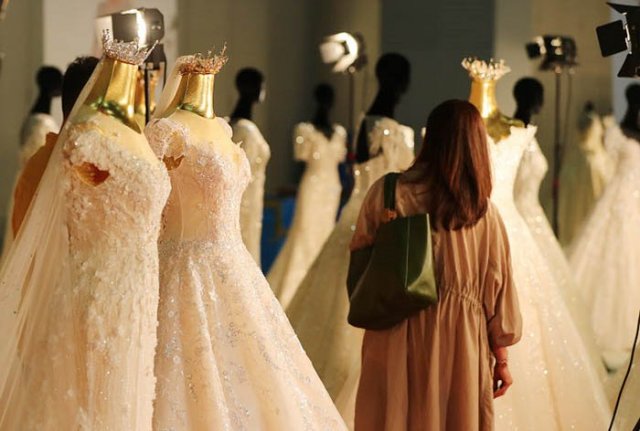 The coronavirus pandemic drastically reduced the number of spring weddings this year, traditionally the peak season for nuptials.

According to Statistics Korea on Wednesday, there were 15,670 weddings this April, down 21.8 percent on-year and the first time the total fell below 20,000 for the month.

In the southeastern city of Daegu, which was a hotbed of coronavirus infections, weddings declined more than 25 percent.

The number of marriages is already on a steady decline due to soaring youth unemployment, rising housing costs and a general aversion to marriage among young Koreans. The coronavirus epidemic made matters worse.

Kim  Jin at Statistics Korea said there were also fewer weekdays this April compared to previous years to register marriages on.

Childbirths declined 10.4 percent to 23,420, also the lowest level for April. Korea's birthrate has been on the decline for 53 consecutive months, and the rate of decline is growing steeper.

The number of births fell 8.7 percent in 2018 and 7.3 percent last year, and so far this year it has plunged 10.9 percent. Sejong administrative city in central Korea was the only region where births rose last year, but this year they also fell there.

"Spring Weddings Plummet Amid Coronavirus Lockdown"
by HanCinema is licensed under a Creative Commons Attribution-Share Alike 3.0 Unported License.
Based on a work from this source