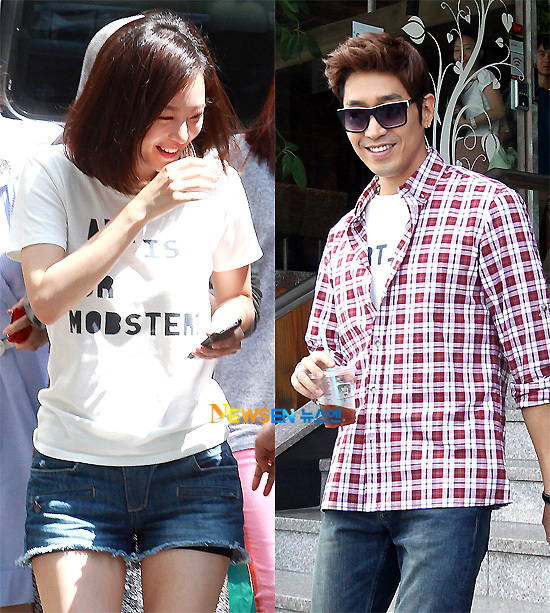 Eric, Han Ye-seul and the crew of KBS 2TV "Spy MyeongWol" took some time to resolve things over some beer.

Everyone had lunch together after a short drama shoot in Donggyodong, Seoul on the 18th. Eric said, "This lunch was arranged so that we could become friends again and for Han Ye-seul to officially apologize".

The atmosphere was surprisingly cheerful. Laughter never ended and conversations went back and forth. Eric and Han Ye-seul faced each other and spoke about the difficult times they had so far, deciding to gather up their will once again. Next to them was the chairman of the productions, the General Manager Ko Young-tak, EP Lee Kang-hyeon, CP Jeong Seong-ho-I, PD Hwang In-hyeok and more, all carrying out conversations without constraint.

They had pork and pig skin, drinking beer, cider and Coke. Lunch was wrapped up lightly as they had more to shoot later. The staff patted Han Ye-seul on her back and expressed their wishes to get along well.

Meanwhile, Han Ye-seul had mentioned, "I was disappointed about certain parts but it turns out they were just misunderstandings".

She continued, "Thank you for accepting me so warmly even after what I have done. I am tender and lacking in several areas. I hope you can understand me with your generosity". Those who listened to this had bright faces but Han Ye-seul couldn't hold back the tears.

Meanwhile, Han Ye-seul returned to the drama site 5 days after announcing her refusal to cooperate.

""Spy MyeongWol" Eric and Han Ye-seul beer party in the middle of the day"
by HanCinema is licensed under a Creative Commons Attribution-Share Alike 3.0 Unported License.
Based on a work from this source