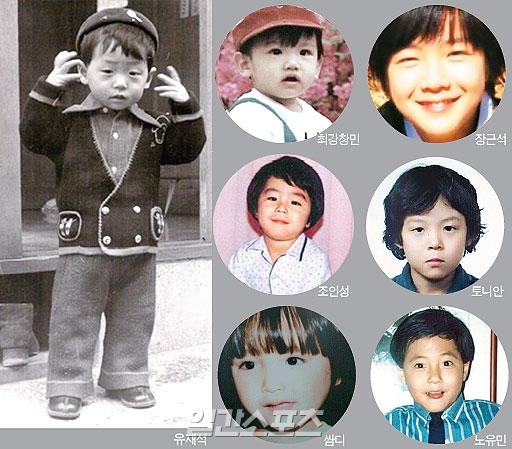 Only women can be pretty? Men would be disappointed to hear that. Kim Heechul, Jang Keun-suk, Lee Joon-gi and more have been called "prettier men than women" for dressing up as women on TV or in movies. The pictures are of men that make women jealous.

They say "Sandalwood is fragrant even in seed leaf". Jang Keun-suk is the one and only male celebrity who is from the "Pretty Child Contest". His smile from then is hard to distinguish if he is a boy or a girl. There is a reason for stealing 'nunas' (elder sister) hearts. The term 'pretty' is well suited for him.

Even the picture of Jo In-sung who is being discharged from the army this May is fragrant. His thin smile and cute appearance might've made a few girls cry in the past. Group TVXQ's Changmin had a thick double eyelid from his younger days. The cuteness of his hands held together is a bonus. The azalea behind him is not even obvious.

There are stars who miss the past years. Simon Dominic from Hip Hop duo group Supreme Team added "The 1st prime time" under a picture he uploaded on his Twitter. In the picture is Simon Dominic with straight cut bangs and bright round eyes. Neighboring ajumma's (old ladies) might've been confused thinking of what to say like "You son has bright eyes" or "Your daughter is so pretty". Noh Yoo-min who stated that U-Kiss's Dongho looks like him when he was younger, has big eyes and fair skin in his picture. His mischievous expression shows how cute he was when he was young.

Just a minute. Who is the kid who beat national actors Jo In-sung, Won Bin and Gang Dong-won, becoming the prettiest child? It's Yoo Jae-suk. In a survey conducted by "TV News At Night" to primary schoolers, Yoo Jae-suk became first only in appearance. His dark eyes and small lips are cute. There is no 'grasshopper' in the picture of little Yoo Jae-suk.

"[Star ESI 3] Male celebs... "I was pretty one time...""
by HanCinema is licensed under a Creative Commons Attribution-Share Alike 3.0 Unported License.
Based on a work from this source