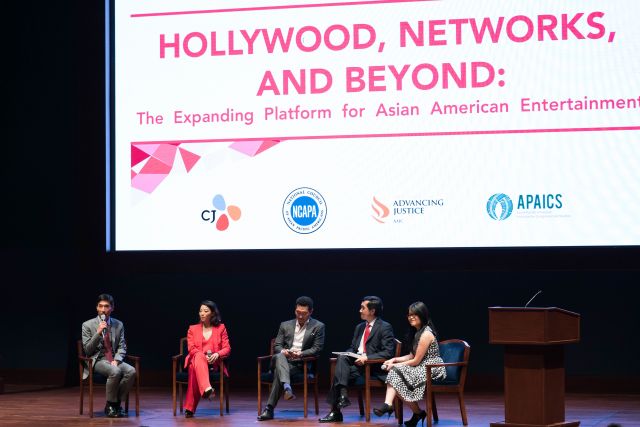 Mnet America (www.mnetamerica.com), the nation's leading network dedicated to Asian American entertainment programming, in collaboration with the Congressional Asian Pacific American Caucus (CAPAC) yesterday evening hosted "Hollywood, Networks and Beyond" – a panel discussion looking at the expanding opportunities and persisting difficulties being seen by the Asian American community in Hollywood. This panel discussion and reception took place at the U.S. Capitol Visitor Center Auditorium in Washington, D.C., in commemoration of Asian Pacific American Heritage Month (APAHM), which is celebrated in the U.S. each May.

"It's been my mission to make sure as Chair of CAPAC that Asian Pacific American Heritage Month is commemorated and celebrated right here in the heart of Washington, D.C., in a way that really makes an impact on this area in our nation's politics", said Rep. Chu. "We should be so proud of the fact that as the fastest growing racial group in the United States, we have translated that all into political power. And this past election, Asian Americans and Pacific Islanders had the greatest turnout for voters and elected the greatest number of AAPIs to Congress in history! We are stepping forward, and it's important that we continue to work together to create greater visibility for our community across the nation".

"Mnet America is committed to continuing its efforts to support Asian and Pacific American talent and creatives in Hollywood", said Sang H. Cho. "The discussion we are having today mirrors the conversations all Asian Americans are having across Hollywood. It is exciting that we can see progress happening on network television, but it's important that these dialogues continue".

Moderated by Traci G. Lee, Digital Editor Manager for NBC Asian America, the panel discussion looked at the relative recent success Asian Americans have seen on major networks with Dr. Ken, Fresh Off the Boat and Master of None. While looking at the successes, the conversation delved into the challenges still being faced by the community. Other topics covered included the media's representation on diversity, what the Asian American and Pacific Islander community and lawmakers could do to help foster diversity in the media, and what advice the panelists had for young Asian American creators and talent.

"There are many obstacles in this industry that you will face that you have no control over, like your ethnicity, but don't ever be ashamed of that", said Daniel Dae Kim. "Celebrate it and work as hard as you can to be the best at what you choose to do, so that when you're in the position of being an influencer, your presence will change things for the better".

"The industry is incredibly competitive and cut throat. As a woman and as a minority, there is no doubt that there are more obstacles", commented Arden Cho. "When there is only one token person of color on a show, you can't call the show 'diverse'. This needs to stop. People of color are more than an accent piece. I'm hoping to see minority actors represented as three-dimensional characters with major plot lines, romance, etc. I hope we are no longer fighting for visibility and just become a natural part of great stories".

"Stars, leaders discuss Asian Americans in Hollywood at Mnet/CAPAC event"
by HanCinema is licensed under a Creative Commons Attribution-Share Alike 3.0 Unported License.
Based on a work from this source