"Stove League" and "Dr. Romantic 2", There's a Reason Behind the SBS Craze 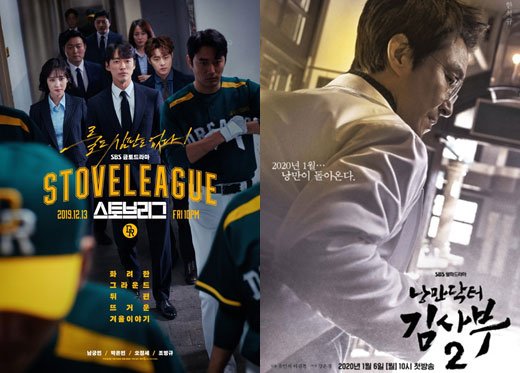 "Stove League" and "Dr. Romantic 2" are two SBS dramas that have taken the lead since the beginning of the year 2020.

"Stove League", which began in December last year, and "Dr. Romantic 2", which began on the 6th of January, each hold an average of 16.5% and 18.6%. Other than tvN's "Crash Landing on You", which holds an average of 14.6%, the two dramas are unmatched in the miniseries department.

"Dr. Romantic 2" is the first drama of the year that SBS fully loaded up for. The story of 'real doctors' in the backdrop of a small hospital in the suburbs, which started in the first season of "Dr. Romantic", hit box office charts with a staggering 30% in viewership.

Thanks to the predecessor's popularity, the production team and Han Suk-kyu got back together again, so the results were obvious. Just as the story revolves around Dr. Kim's perspective, Han Suk-kyu's performance and experience have the power to draw audiences. In addition, amid the media pouring out provocative barbed material, "Dr. Romantic 2" permeates viewers' minds with touching and comforting stories.

However, unlike "Dr. Romantic 2", which had high expectations, "Stove League" drew questions about its success even before its broadcast. Indeed, it was led by Namgoong Min, a very creditable actor, but the unfamiliar topic of baseball made some worry that it would be tough to draw in viewers.

However, "Stove League" isn't just a sports drama, but a story about humans, which touched the viewers' hearts. There are countless conflicts and absurdities within the baseball team 'Dreams', which is at the end of its life, and viewers feel catharsis through the process of resolving the deeply rooted problems one by one. They even cheer on for 'Dreams', as they see how it's changing.

"Dr. Romantic 2" and "Stove League" are popular not only because of the lead actors, but also because of the supporting roles. They have been loyal to the basic elements that make up a drama and this is why their caused sensation, that's getting bigger and bigger, is worthy of acknowledgment.

""Stove League" and "Dr. Romantic 2", There's a Reason Behind the SBS Craze"
by HanCinema is licensed under a Creative Commons Attribution-Share Alike 3.0 Unported License.
Based on a work from this source