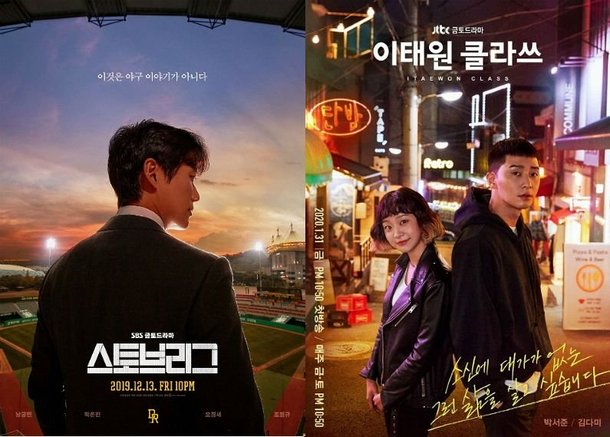 In the past, entertainment TV shows had control of Friday night TV. However, there is a change coming, and the reason for that is behind the leap in drama content with solid stories.

The final episode of "Stove League" ended with Baek Seung-soo (Namgoong Min) saving Dreams by selling it to PF.

"Stove League" began with a viewership of 5.5% and ended up with two digits in just four episodes. This was thanks to the good storyline and good production. It also broke the stereotype that 'sports dramas don't succeed'.

JTBC drama "Itaewon Class" rated 10.7% and 12% on the same day, breaking its own record. The increasing rating of "Itaewon Class" is noticeable, as it started with 4.9%, but broke through 10% in just five episodes.

The power of this drama is that it has already been proven to be a popular webtoon. The original writer, Kwang Jin, also participates in the drama's screenplay.

His choice to expand the narrative and the relationships between the characters that he never managed to do on the webtoon is the main idea.

""Stove League" and "Itaewon Class" Work Together"
by HanCinema is licensed under a Creative Commons Attribution-Share Alike 3.0 Unported License.
Based on a work from this source