"Stove League" to "The King: Eternal Monarch" Surpass 10% Average Viewer Rating in the First Half of 2020 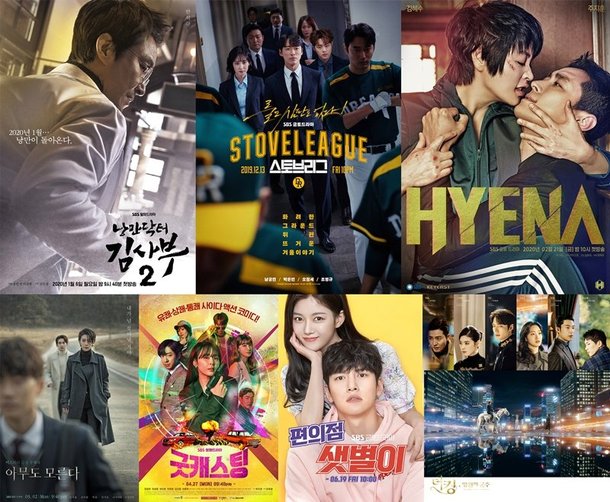 SBS dramas earned an average viewer rating of more than 10% in the first half of 2020.

Based on the first half of 2020 (01/01/2020 to 06/30/2020), SBS dramas overwhelmed other companies in ratings and revealed its presence as a 'drama kingdom'. According to Nielsen Korea, a ratings agency, SBS recorded 11.6% of the average household audience rating, surpassing the 10% wall, as a result of analyzing the ratings of dramas aired by three ground-wave broadcasters, tvN, and JTBC in the first half of the year. JTBC followed with 8.2%, followed by tvN with 5.5%, MBC with 4.3% and KBS with 3.7%.

SBS dramas, which recorded 4.8% in the 2049 viewer rating, also topped the list in popularity and competitiveness. JTBC followed with 3.8% and tvN with 3.1%, followed by MBC with 1.7% and KBS with 1.1%. In addition, other broadcasters relied on one or two hits, while SBS clearly proved that it was a 'trustworthy' drama channel, with five of the seven dramas aired in the first half of the year entering the top 10 and all seven entering the top 15.

The race for the SBS drama will continue in the second half of the year. First of all, "Alice", the most anticipated drama in the second half of the year, will be broadcast as an SBS Friday-Saturday drama following "Backstreet Rookie". "Alice", which is drawing much attention and anticipation just with Kim Hee-sun and Joo Won, is a human SF drama about a magical time travel of a woman resembling her dead mother and a man who lost his emotions.

Also, "Do You Like Brahms" starring Park Eun-bin and Kim Min-jae-I, about the dreams and love of classical music students on the border of 29 years old, will return to SBS' Monday-Tuesday drama on August 31st. At the beginning of autumn, it is drawing attention as a drama of unique sensibility that will attract viewers to the world of classical romance.

It will be followed by "Delayed Justice" and "Penthouse: War In Life". In the second half of the year, SBS Friday-Saturday drama, "Delayed Justice" will be cast with two luxury actors Kwon Sang-woo and Bae Sung-woo, heralding the birth of 'the greatest combination ever'. "Delayed Justice" is a hot story about two men representing the voices of unjustified judicial victims to the world and is all the more anticipated as director Kwak Jeong-hwan and writer Park Sang-kyu, who showed in-depth directing skills through the "Miss Hammurabi" and "Chief of Staff" series, are in charge.

Kim Soon-ok's next drama, "Penthouse: War In Life" heralds another syndrome with a drama about a woman's desire, motherhood and real estate success, which runs her life toward entering the upper class. Director Joo Dong-min, who worked with writer Kim Soon-ok in "The Last Empress", will be in charge of directing the film, scheduled to be organized in the second half of the year.

""Stove League" to "The King: Eternal Monarch" Surpass 10% Average Viewer Rating in the First Half of 2020"
by HanCinema is licensed under a Creative Commons Attribution-Share Alike 3.0 Unported License.
Based on a work from this source