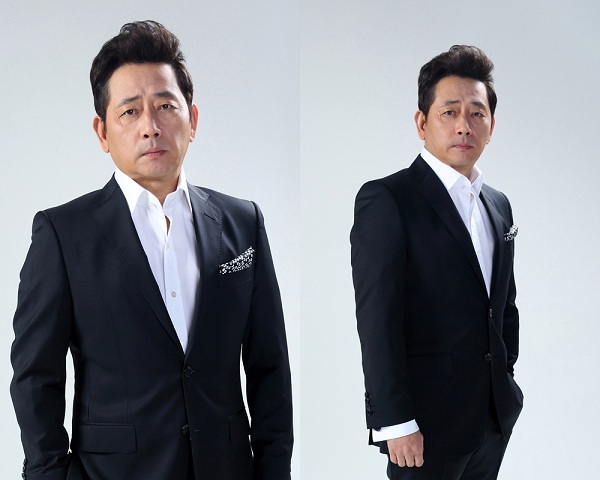 Jun Kwang-ryul will paly Cho Sang-taek, who once was a security police and later turns himself into a CEO of a fake company disguised as a money exchange firm.

Cho Sang-taek is a cold-blooded figure, who can betray anyone in order to survive under any given circumstances. He can be simply described as a hyena with the ultimate surviving skills.

In the revealed photo, Jun Kwang-ryul shows off his charismatic presence with the sharp eyes and the poker face. His simplistic black suit contrasted with the prominent face scar near his eyes raises curiosity about the character he is going to play.

During the photo shoot session he had on April 28th, he and the crew made extra efforts on the face scar to create the image of Cho Sang-taek in details.

Jun Kwang-ryul said "Since I started my acting career, this is the first time for me to wear the scar makeup" being proud of his character, Cho Sang-taek.

Kimjonghak Production in charge of "Masked Prosecutor" said, "Jun Kwang-ryul's weighty presence will add the strength to the drama. You will be able to confirm what the classy fine acting performance by a veteran actor should be like".

"Masked Prosecutor" will premiere on May 20th after the completion of "Unkind Women".