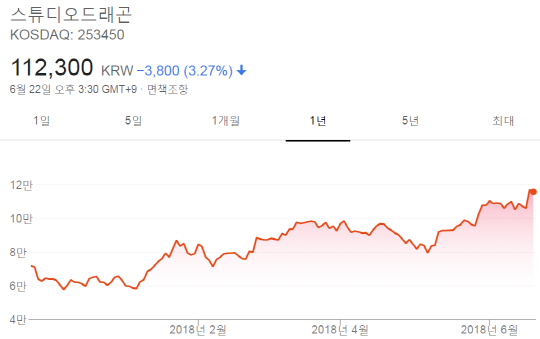 Studio Dragon signed the largest drama sales contract to date. Studio Dragon has steadily increased its share price by inspiring confidence in earnings since it was listed on the Kosdaq last November. In particular, it anticipates strong earnings growth until the end of the year, which should boost share prices.

Studio Dragon announced that it had signed a broadcasting rights license agreement for "Mr. Sunshine" with Netflix on the 21st to the 28th of June, 2028. The down payment amount is a secret, but considering that the disclosure standard is 10% of sales, the sales revenue could be at least 29 billion won. Studio Dragon hit 286,800,000,000 won (1120 KRW ~ 1 USD) just last year.

The agreement will make the company's profits even higher. The production cost for "Mr. Sunshine" is 40 billion won, but combined with CJ E & M's broadcasting rights, Netflix sales, domestic VOD revenue and indirect advertising (PPL or product placement), the total is estimated at 57 billion won.

Earnings growth is expected to pick up towards the end of the year as Netflix and China earnings are being reflected.

Securities firms are raising the target price of Studio Dragon according to earnings expectations.

In the long term, a variety of OTT (over the top) platforms such as Amazon Prime Video, Netflix and Google's YouTube are accelerating their entry into Asia, which is expected to benefit Studio Dragon. OTT is a service that provides various media contents such as broadcasting programs, movies, and education through the internet.

A researcher at the Hanhwa Investment Securities emphasized that "Overseas capital inflows to the Asian content market are expected to continue, and Studio Dragon is also discussing various content creations with YouTube and other platforms. We expect Korean film producers to benefit from a rise in overseas rights prices for structured Korean dramas that relate to global platform competition and better environment changes".

Researcher Kim Hyun-yong from eBEST Investment Securities Co., Ltd. said, "It's confirmed that the net price of Netflix's copyright sales is renewed and the resale value of Korean dramas will increase. There's nothing in China that will replace Korean dramas and strong earnings is possible if China resumes import".

"Studio Dragon Signs Major Drama Sales Contract"
by HanCinema is licensed under a Creative Commons Attribution-Share Alike 3.0 Unported License.
Based on a work from this source