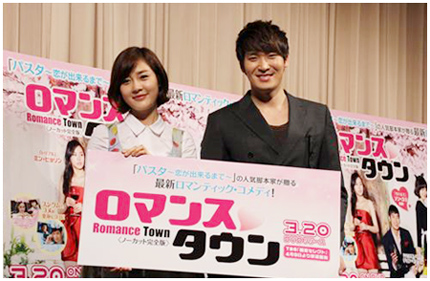 The protagonists of the popular drama "Romance Town", Sung Yu-ri and Jung Gyu-woon, visited Japan and participated in various promotional activities for the drama such as giving interviews and appearing on talk show programs. The event to commemorate the release of the "Romance Town" DVD was held at Space FS Shiodome in Tokyo on March 18, and Sung Yu-ri, Jung Gyu-woon and a Japanese actor and plastic surgeon named Nishikawa Ayako appeared at the event.

Sung Yu-ri revealed her feelings about the airing of the drama in Japan from April 9 on TBS, saying, "I felt a strong attachment to the drama while filming, so I am really happy and honored that the drama has come to air in Japan for many Japanese viewers". Sung, who played the character Roh Soon Geum, continued, "I played one of the characters who is isolated from society, which was very meaningful and special to me. The development of the stories around the characters was very interesting". Jung Gyu-woon, who first appeared in a romantic comedy drama by playing the heir of a chaebol, said, "Roh Soon Geum is actually an ideal woman who is beautiful and good at cooking. Actually I was a huge fan of Sung Yu-ri when she was a member of the group FINKL. When we filmed together, I sometimes felt amazing when looking at her, who was once my star, while filming together". 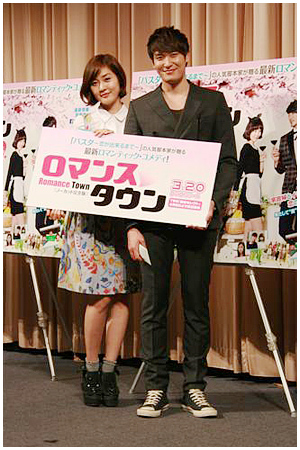 When the doctor Nishikawa Ayako held a lottery as a present to the two actors, Sung Yu-ri said, "If I can win the prize money, I would like to use the money for good deeds". Jung Gyu-woon added, "I have given interviews to 21 media outlets up to now in Japan and I have been asked the same question. As I mentioned earlier during previous interviews, I would like to run a cafe and a club where I can enjoy my favorite music if I can win the lottery".