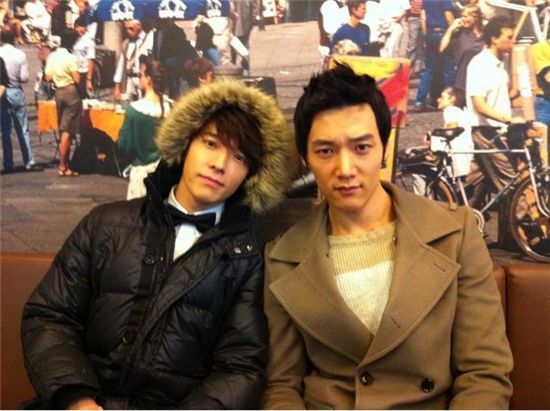 On Tuesday, the 23-year-old singer uploaded a photograph of himself wearing a black bow tie and Kim with a comment underneath saying, "Just finished shooting with 'It's Okay, Daddy's Girl' star Tae-ho (who plays Donghae's older brother in the show). It's snowing! (laugh) We made a snowman together! Make sure to walk slowly since it's slippery outside!"

Fans who have seen the picture left responses such as, "You look so cute oppa!" "Hope you do well in your drama!" and "Fighting Donghae! and Fighting 'I"m Ok, Daddy!"

In mid-October, SM Entertainment announced that Donghae was cast to play Kim Wook-gi, a tough and earnest guy who joins CNBLUE member Kang Min-hyuk's character in a band for SBS' Monday and Tuesday drama "It's Okay, Daddy's Girl".

The series, which began its run on November 22, is about a girl named Eun Chae-ryong (played by Moon Chae-won) who makes sacrifices to help her family after her father's accident.

Donghae made his debut in the 13-member boy band Super Junior in 2005, releasing their first album "SuperJunior05" and produced numerous hit songs such as "Sorry, Sorry", "It's You", "Rukkugo" and "BONAMANA".

The group recently placed at No. 2 in overall album sales this year after female idols Girls' Generation and came in first place with their fourth full-length album "BONAMANA".

"Super Junior Donghae poses with "It's Okay, Daddy's Girl" co-star "
by HanCinema is licensed under a Creative Commons Attribution-Share Alike 3.0 Unported License.
Based on a work from this source