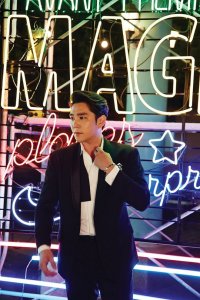 Prosecutors indicted pop idol Kangin of Super Junior without detention, Wednesday, for a hit-and-run accident while driving under the influence of alcohol, requesting a summary judgment imposing an 8 million won fine.

The Seoul Central Public Prosecutors' Office said it had finished its investigation into the case and that a summary fine was more appropriate than arrest, trial and imprisonment.

Kang was booked Oct. 16 for fleeing the scene after hitting two taxis on a road in Gangnam, southern Seoul, while driving a rental car at a speed of 40-50 kilometers per hour. He surrendered himself to police six hours later.

His blood alcohol level was 0.081 percent, high enough to have his license revoked.

Kang was booked the previous month for violence when he hit a bar patron in a bar. The prosecution suspended that indictment citing that Kang he had no prior criminal record and that his participation in the brawl was minor.

"Super Junior Star Kangindicted"
by HanCinema is licensed under a Creative Commons Attribution-Share Alike 3.0 Unported License.
Based on a work from this source