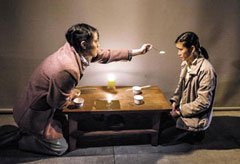 An imaginative play about two sisters from North Korea titled "You for Me for You" has opened to rave reviews in London.

The play, by ethnic Korean Mia Chung, premiered in the U.S. in 2012, and opened in a lavish new production at the Royal Court Theatre in London last week.

The Financial Times gave the "bizarre" production four stars out of five, and other major daily newspapers like the Guardian and the Independent followed suit.

The play is about two sisters who are separated while trying to escape from North Korea, and mirrors in surreal form the absurdities of the North Korean regime and the difficulties North Korean defectors experience during and after leaving the totalitarian country.

Chung explains that she was inspired to write the play by a BBC documentary that showed a woman who escaped North Korea saved up money to bring her younger sister who was left behind to Seoul. But when her sister came to Seoul, she begged to be sent back to North Korea.

Katie Leung, best known as Harry Potter's love interest Cho Chang in the franchise, plays Junhee, the younger sister, and Wendy Kweh plays older sister Minhee. The play will be on until Jan. 9.

"Surreal N.Korean Defector Play Wows London Critics"
by HanCinema is licensed under a Creative Commons Attribution-Share Alike 3.0 Unported License.
Based on a work from this source