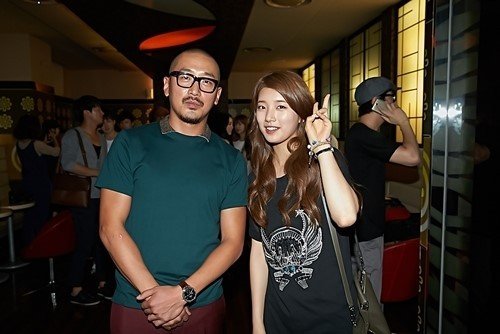 Miss A's contract with JYP is done and Suzy moving to Management Forest.

It looks like she's making a big move as an actress and her relationship with Ha Jung-woo who she stars in "Ashfall" with, resurfaced.

A picture from 2013 during the Lotte Entertainment VIP premiere of "The Terror Live" was released.

Ha Jung-woo seems frozen standing next to Suzy for a picture.

"I took popcorn into the theater, but the movie was so good I didn't have time to eat it. Ha Jung-woo was great", Suzy had said at the time.

Meanwhile, Ha Jung-woo and Suzy are starring in the movie "The Terror Live", which was in the limelight even before production began thanks to Lee Byung-hun.

However, Ha Jung-woo had shown his disappointment saying, "There's no point because I don't see my wife in the movie. I'm always with Lee Byung-hun".

"Ashfall" is a blockbuster movie about the struggles to stop Ashfall from exploding.

"Ashfall" cranked in this February and aims for release at the end of the year.

"Suzy Moves to Management Forest"
by HanCinema is licensed under a Creative Commons Attribution-Share Alike 3.0 Unported License.
Based on a work from this source