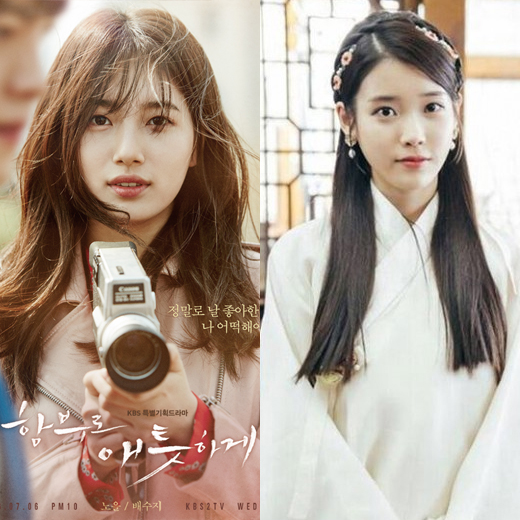 Suzy and IU, the two best friends are returning to the small screen through two different dramas produced on the pre-filming system.

As the dramas are produced through the 100% pre-filming system and will be broadcast in Korea and China at the same time, the anticipation has been raised even higher. While the two stars, who experienced acting for the first time for their roles in "Dream High", 2011, will they be able to earn a happy scorecard through the upcoming dramas?.

Suzy is returning to the small screen for her role as No-eul, a documentary producer in KBS 2TV's new Wednesday & Thursday drama, "Uncontrollably Fond" starting on July 6th. This is her drama comeback in three years since her appearance in 'Gu Family Book', 2013.

"Uncontrollably Fond" will depict the ardent and rough love story about a man and a woman who had to be separated during the childhood due to the ill-fated relationship and meet again in adulthood as a superstar (Kim Woo-bin) and a documentary producer (Suzy). While the drama is garnering attention in Korea as well as in China, there is anticipation arising that it may become the next 'Descendants of the Sun'.

IU will meet the drama fans through SBS' forthcoming Monday & Tuesday drama, "Scarlet Heart: Ryeo" on August 29th. She will play a strong independent woman, Hae-soo, whose spirit was straightly dropped into the Goryeo era from the 21st century. She will stir up the hearts of the princes in Goryeo. The production team said, "The character and IU go very well".

While IU has been presenting her side as an actress through her various appearances so far, actress IU is familiar to many drama fans for her role in "Producers" most recently. Since "Scarlet Heart: Ryeo" is a remake of the Chinese drama with the same title and she will co-star with the hallyu star Lee Joon-gi, it is expected that the drama will prepare a strong foothold for her to expand her activities into the Chinese entertainment industry

Suzy and IU, both singer actresses who began their actress career though the same drama are drawing attention as to what result they may come out with in this friendly competition.

"Suzy vs IU, two best friends take up challenge to pre-filming production "
by HanCinema is licensed under a Creative Commons Attribution-Share Alike 3.0 Unported License.
Based on a work from this source