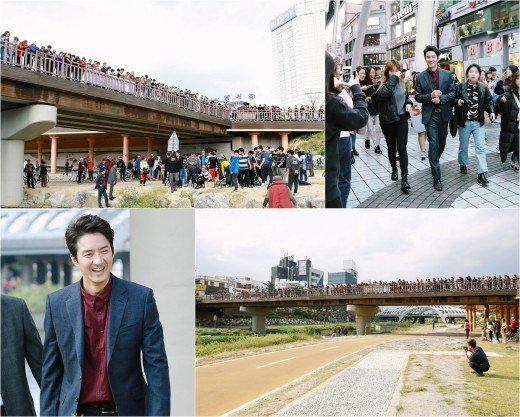 He visited his hometown while filming the new MBC drama "Sweet Family".

"Sweet Family" actors and actresses will be speaking the Choongchung-do dialect. The background is in Choongchung-do as well so a pretty big crowd gathered around to see Jung Joon-ho.

An intense tracking scene was filmed in Daejeon on the 10th. Citizens of Daejeon gathered around the site and caused all things to stop for a while. Still, crowds tip toed and craned their necks to get a glimpse of the super star.

Jung Joon-ho didn't turn down people's requests for pictures. Coming from the city of Yesan in Choongchung-do, Jung Joon-ho mentioned places in Daejeon that were childhood memories of his.

Cheered on by his hometown people, Jung Joon-ho did his best that day. He once slipped and fell while running but he got up right away and continued to act. However, he didn't know his elbow had been scraped and bleeding.

Meanwhile, "Sweet Family" is a human comedy about the breadwinner of a family who doesn't get attention at home from his wife or kids but is actually the leader of a gang outside.

"Sweet Family" is scheduled to broadcast in November.

""Sweet Family" Jung Joon-ho's popularity in Choongchung-do"
by HanCinema is licensed under a Creative Commons Attribution-Share Alike 3.0 Unported License.
Based on a work from this source