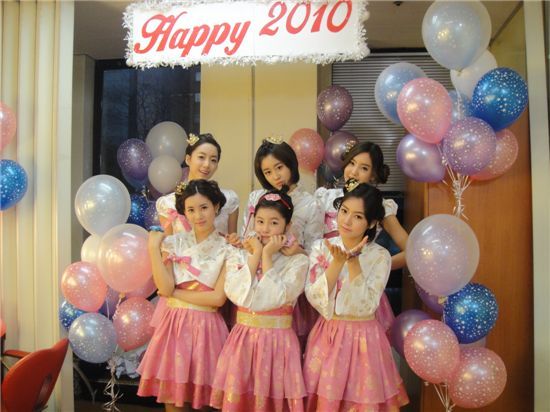 Korean girl group T-ara dominated the K-pop charts on televised music shows for the second week in a row.

The group took the crown on KBS's "Music Bank" on Friday with their hit single "Bo Peep Bo Peep", the title track from their album "Absolute First Album".

"Thank you so much", the group said in their acceptance speech. "We will always work hard".

T-ara, trained and managed by Mnet Media, debuted with the single "Lies" in July 2009 and topped various music charts with their collaboration with boy band Choshinsung on "T.T.L (Time To Love)" and "T.T.L. Listen 2".

Their first full-length album "Absolute First Album", which was released on November 27, has ranked at No. 1 on Mnet's weekly album chart for several weeks.

"T-ara dominates TV music charts for second week"
by HanCinema is licensed under a Creative Commons Attribution-Share Alike 3.0 Unported License.
Based on a work from this source