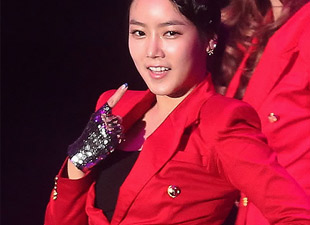 T-ara will be getting a new leader!

Former leader Hyomin is passing on the baton to Soyeon to lead the popular idol group. According to Core Contents Media, this leadership change will start up for the release of the girls' repackaged album single "Lovey Dovey", January 1, 2012. Soyeon is noted for her lead vocal skills and her strong sense of responsibility. She will be the fourth leader of T-ara, following Ham Eun-jung, Bo-ram, and Hyomin.

"T-ara's Soyeon To Lead Group Following Hyomin "
by HanCinema is licensed under a Creative Commons Attribution-Share Alike 3.0 Unported License.
Based on a work from this source