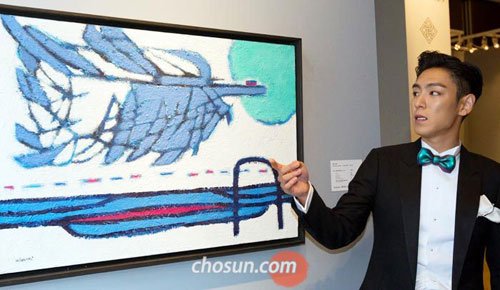 Big Bang's T.O.P (Choi Seung-hyun) introduces a painting during a press event in Seoul on Monday for the upcoming Sotheby's auction in Hong Kong.

T.O.P of K-pop boy band Big Bang has been invited to curate a charity auction held by Sotheby's in Hong Kong on Oct. 3.

He himself selected 28 pieces of art to be put on sale at the auction, dubbed "#TTTOP". He revealed his wide knowledge of art at a press event in Seoul on Monday.

"My grandma's uncle was abstract painter Kim Whan-ki and my uncle's father was painter Lee In-sung", he said. "Since I grew up appreciating Korean art, I not only selected pieces by famous Western artists such as Richter and Andy Warhol but also distinguished and young Asian artists because I wanted to add variety to the collection".

"I often get inspiration from visual images which helps me in my music and acting careers", he said. "I hope young people can experience the same".

He also said he chose the works that suit his taste and that he wants to hang in his house, not just works by famous artists.

The project was suggested by a young Japanese collector a year and half ago. Some of the proceeds will be donated to the Asian Cultural Council which helps young artists in Asia.

"At first, I worried if the auction would look like a commercial event", he said. "But I decided to participate to help struggling young artists".

Japanese pop artist Takashi Murakami, who was a scholar of the ACC, is also participating in the auction.