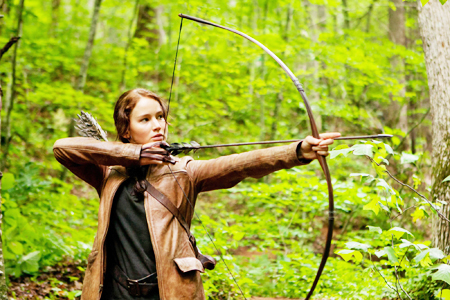 Jennifer Lawrence in a scene from "The Hunger Games". The fantasy blockbuster opens nationally in theaters. (Courtesy of Lotte Entertainment)

The buzz for "The Hunger Games" had been so enormous that local studios waved their white flags even before the fight.

The eponymous film based on Suzanne Collins' best-selling sci-fi novel trilogy opened in theaters nationwide this week against no major release by a Korean studio - and thus has excellent odds to be the victor at the box office.

It is a pity the local productions chickened out because the grand-scale, story-driven, CGI-heavy and no-star cinematic formula of the Hollywood imports has thus far failed to convince the Korean audience this year with a couple of exceptions.

"The Hunger Games", directed by Gary Ross and its screenplay adapted by Collins herself, follows the journey of Katniss Everdeen (Jennifer Laurence) in a post-apocalyptic North American nation called Panem. When her sister Primrose (Willow Shields) is picked by lottery to compete in the annual Hunger Game, in which "tributes" from each district fight to the death until only one remains, she volunteers to go in her stead, along with male counterpart Peeta Mellark (Josh Hutcherson), to the battle that takes place in Panem's center Capitol.

The movie largely achieves its main goal: fast-paced visual entertainment. There is little to fault in this overall swashbuckler picture, the 2.5-hour running time notwithstanding. The pacing is neither slow nor fast, and the love arc between Katniss and Peeta does not feel overly forced.

If there is a dose of bitter aftertaste remaining in the mouths of Korean moviegoers as the ending credits roll, it is probably due to the unnecessary and not-so-subtle racism playing on the "Asians are weak" stereotype. The thankless Asian contestants on the Hunger Game fail in training and are killed off early. Given the brevity of these scenes, however, it is unclear as to why race was ever a factor in choosing these roles.

Hollywood could learn a thing or two from the unexpected success of the French film "Intouchables", whose rather cliche but irresistible feel-good factor won massive audiences worldwide - including here - with much less investment. Taking the rich-poor divide issue with charm, the Olivier Nakache and Eric Toledano movie hit a sensitive spot for the locals and attracted close to a million people in 10 days.

The "Games" packs a plethora of hit-making components in one picture-perfect package: a sexy plotline with enough danger and suspense, colorful and futuristic set designs and costumes, emotional thrills and romance, action and explosives, political undertones and an underdog to root for.

The creative team seems to have gone too far into the depths of its imagination, however, rendering everything so sleek and polished that even abject poverty in Katniss' hometown looks no less pleasant than a relaxing vacation at a mountain cabin. Even as she hunts for food, she looks squeaky clean.

But those details are too inconvenient and heavy for entertainment, it seems.

Two stars out of four.

Currently in theaters. Runs for 142 minutes. Rated 15 and over. Distributed by Lotte Entertainment jay@koreatimes.co.kr

"Tainted victory for 'Hunger Games'"
by HanCinema is licensed under a Creative Commons Attribution-Share Alike 3.0 Unported License.
Based on a work from this source