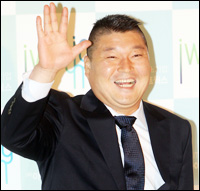 Popular comedian and TV show host Kang Ho-dong might have thought that his trouble with law enforcement authorities would end as soon as he pledged to pay back taxes and penalties amounting to hundreds of millions of won. It turns out to be wishful thinking as he is now being accused of evading taxes.

Kang's problem has also unnerved other high-income celebrities who are concerned that the tax office may come after them.

The Seoul Central District Prosecutors' Office said Wednesday that an unidentified businessman filed a complaint against the 41-year-old traditional Korean ssireum wrestler-turned-comedian, claiming that he broke the law by evading taxes.

In a petition filed with the prosecution, the businessman argued that Kang engages in various entertainment-related activities and runs his own businesses, earning over 30 billion won ($28 million) per year.

"Kang committed wrongdoings in order to evade taxes. After being caught, he just excused himself by saying that he did not know about any irregularities", the petition said. "The comedian then said he would pay the back taxes. This attitude is unacceptable, given that he is one of the country's most beloved entertainers".

The businessman said Kang should be penalized for what he did, urging the prosecution to make an example out of him so that other celebrities do not dare to avoid paying taxes.

The prosecution said Wednesday that it has yet to decide on whether it will launch an investigation of the top star.

On Monday, Kang's agency said the comedian was hit with back and penalty taxes as he had allegedly avoided paying tax by such methods as inflating staff wages and other expenses. The agency said Kang had been under a tax investigation for five months since April and stressed that he will pay the taxes as required by the National Tax Service (NTS).

The entertainer also issued an apology to his fans, saying that he will pay what he owes and faithfully fulfill his duty as a responsible member of society.

Kang is not alone in that famous actress Kim Ah-joong was slapped with back and penalty taxes for failing to properly declare her income. Kim issued a public apology through her agency, saying she will pay the additional taxes, regardless of the reason, and pay more attention to tax-related matters in the future.

But Kang and Kim may not be the only celebrities under tax probes. More entertainers could face similar penalties.

The NTS has been vowing to crack down on high-income self-employed, such as doctors, lawyers and entertainers who may have been engaged in illicit activities to pay less tax.

"We will continue to closely look into the income and expenses of highly-paid professionals to collect unpaid taxes as this year's tax revenue is expected to stagnate due to the ongoing economic downturn", an NTS official said, hinting that more entertainers may be targeted for tax investigation.

A local showbiz executive said several well-known celebrities have contacted the tax office to check whether their taxes were filed properly or not.

"They know that their public image will be severely damaged if they run into trouble with the tax authorities. I think many celebrities will keep a close eye on what the tax office does next", he said.

"Tax probe unnerves high-income celebs"
by HanCinema is licensed under a Creative Commons Attribution-Share Alike 3.0 Unported License.
Based on a work from this source