"Team Umizoomi" has a hint of Korean culture. 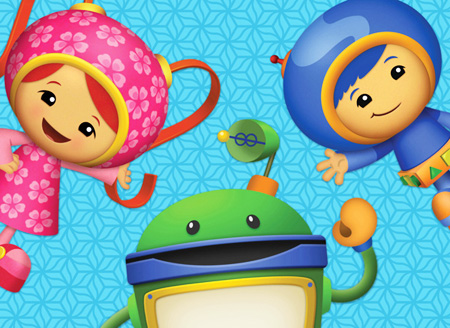 "Team Umizoomi" is a popular animated show for preschoolers airing on MTV, solving everyday problems using math. Milly, her brother Geo and robot friend Bot work in a team, travelling in Umi Car to settle such daily problems as fixing a watering can.

The animation has a hint of Korean culture - the characters fly kites and the patterns on Milly and Geo's clothes and of the buildings come from traditional Korean designs. Soo Kim, producer and design director of the show, has contributed to its unique atmosphere. "The characters have simple black eyes, just like Koreans", Kim said in a telephone interview with The Korea Times.

Born in Korea, Kim immigrated to the United States when she was a child. She majored in pre-medical studies as most Korean-American children do.

However, instead of becoming a doctor, she moved to New York and leapt into the world of animation.

She first worked on an MTV animation team before joining children-focused channel Nickelodeon to design for "Blue's Clues" in 1996.
"It was a big draw for me. While working at MTV, I was attracted to animation and grew up together with my work", she said.

Kim referred to herself as "a very visual person". "I have an opportunity to create a new world with new rules when I produce animation", she said.

"'Team Umizoomi' brought real world and fantasy together", Kim said.
The program premiered in January 2010 in the U.S. and the preschool show has a monthly viewership over 20 million in the U.S. and is also popular in the United Kingdom and Australia. The show airs on Nickelodeon in Korea weekdays at 8 a.m.

"'Math superhero saves the day with math'. Isn't it cool? People think math is difficult, but I think it is a myth that we want to break", Kim said. "The other breakthrough is that preschoolers are already good at math. For instance, they match buttons to holes and count pancakes for breakfast. Children think it is fun and the math helps them get around the world".

The producer said she doesn't want the children to realize what math is and what isn't in the show. "There is math everywhere and we want preschoolers to see math as exciting as art or music", she said. 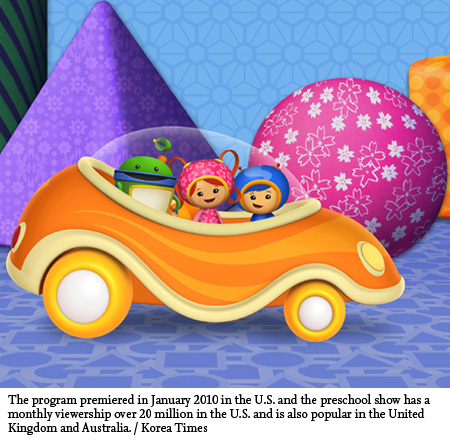 To design the patterns of the clothes and background, Kim went through a large collection of origami and it inspired the design of "Team Umizoomi".

"The patterns are everywhere, overlaid on buildings, pavement and trees. That works well with math and has a big influence, design-wise".

Despite having moved to the U.S. at an early age, Kim speaks Korean and has memories of playing games with her family in Korea.
"I remember guessing the age, job and personality of villagers and they were amused that such a young child figured out those things. When I think back, what I did was sorting and classifying, which is a part of math. Little kids already do math every day".
Kim's background brought activities like kite-flying and phrases like "haja" (let's do) and "gaja" (let's go) into the pilot episode of the show.

"Though we decided to take out cultural aspects from the show to make it more universal, I can't help but put in some aspects", she said.

Kim said it is important to tell the story and convey a curriculum from the viewpoint of children.
"We have a large research team here and they study reactions to each episode at least three times before broadcasting and we develop the show based on the reviews. That's one of the keys to success", the producer said.

Kim advised young animators to have "creative vision". "Also, it is important to maintain strong connections with staff members as animation is teamwork", she said. "There are a lot of talented people in the world. Maintain great personal connections and do not step on people".