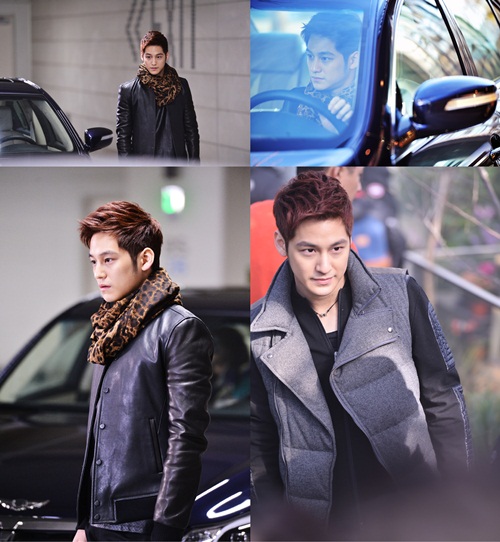 Kim Beom has become the man in "That Winter, the Wind Blows".

Still cuts of the actor were revealed on the 23rd of January. His red hair and strong appeal is the image of Park Jin-seong.

Park Jin-seong is rough and aggressive although immature at the same time. He loves a woman named Hee-seon (Jung Eun-ji) who loves another man.

Kim Beom is wearing a leather jacket with a leopard print muffler and fancy accessories. He cut off the long hair he had when he was in the JTBC drama "Padam Padam... The Sound of His and Her Heartbeats".

Known as the persona of writer Noh Hee-kyeong, Kim Beom is coming back with a ground wave drama for the first time in 3 years.

""That Winter, the Wind Blows" Kim Beom in short red hair"
by HanCinema is licensed under a Creative Commons Attribution-Share Alike 3.0 Unported License.
Based on a work from this source