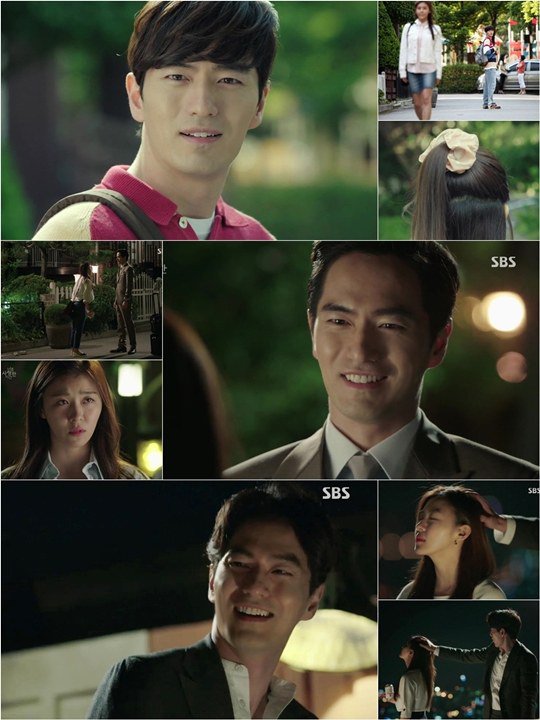 The way Lee Jin-wook looks at Ha Ji-won has become the hottest topic.

He plays Choi Won in the recent SBS drama "The Time I Loved You". The way he looks at his friend Oh Ha-na (Ha Ji-won) of 17 years, is heart melting.

Choi Won is Ha-na's "Boy" friend who has been by her side since high school until now, but the way he looks at her suggests that he might think of her more than just a childhood friend. Here are 3 of the best scenes from the drama:

The first scene is from the second episode. Choi Won can't help but stare at Oh Ha-na who tied her hair in half with a polka-dotted hair-band unlike her usual headband style.

In addition, he picked up her hair-band at the couple date they ran into each other at despite knowing that it belonged to her.

In the first episode, Choi Won came along with Ha-na's call as she was drinking outside a convenient store. She asked him while drunk, "Why can't I be loved?" and he looked at her like she was the cutest thing in the whole world.

Oh Ha-na continued, "You wait and see. I am going to pay you back!" She stumbled to go home but Choi Won watched her from behind until she returned home safely.

In the first episode, Choi Won comforts Ha-na over a plate of spicy chicken feet and messes up her hair in a playful way.

Oh Ha-na says, "I am going to meet a better guy next time. I don't care how tall or good looking he is". Choi Won responds, "You are now starting to pay attention to reality now" then messes up her hair.

Choi Won has always looked at Oh Ha-na so sweetly ever since they were teenagers. Expectations are rising for the third episode; no one knows how he'll look at her again.

"The Time I Loved You" is a romantic comedy about a man and a woman who have been friends for more than half their lives but experience a complicated feeling of romance.

"The 3 BEST scenes of Lee Jin-wook looking at Ha Ji-won in "The Time I Loved You""
by HanCinema is licensed under a Creative Commons Attribution-Share Alike 3.0 Unported License.
Based on a work from this source