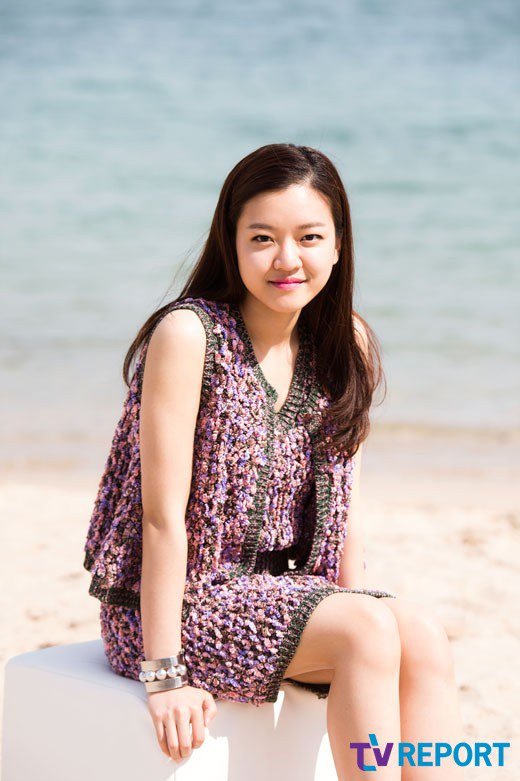 Actress Go Ah-sung went to Cannes for the third time. This time she was invited to the event for "The Office".

"The Office" is about an ordinary office man named Kim Byeong-gook (Bae Sung-woo) killing all of his family and returning to the office only to hide himself. Then he kills his colleagues one by one. Go Ah-sung plays Lee Mi-rae who stands in the middle of the mystery.

The movie revolves around unexpected cases in a surrounding where we normally feel we are familiar with. This movie is something between a thriller and horror flick and the response from the crowd was great when it was premiered on the 18th in

Go Ah-sung has been stacking up on her career ever since "The Host", "Snowpiercer" and "Heard It Through the Grapevine". It seems like "The Office" was the perfect role for her.

She's been acting for 11 years now but she still claims herself an 'intern'. "I want to try out more fun roles".

Q: This is your third visit to Cannes

Go Ah-sung: I didn't know anything when I first came. I started to be interested in Cannes when I returned home. This is the first time in 6 years since I've been back and I want it to be fun.

How does it feel to be on the Red Carpet?

I was so nervous. It was the first time I saw the movie because the director wouldn't show it to me.

You wore pants instead of a skirt

I was too busy to prepare for the Red Carpet. I chose this outfit from a show room.

How does it feel to see the completed version of the movie?

I am in a maze. I am currently filming a 30 episode drama but it's tough. There was a rhythm to making movies. I have been shooting a 2 hour movie for 3 months but now I'm making a four hour drama in four days. The emotional consumption is amazing. It requires much more emotional use than movies. It was very confusing to watch a movie from last year after being so focused on "Heard It Through the Grapevine".

Were you busy because of "Heard It Through the Grapevine"?

Dramas have set dates. A day overlapped with Cannes so I had to finish everything in a day. I had to be here because Park Sung-woong couldn't come.

You said you were nervous but you don't seem that bad

I shake a lot but I am good at pretending not to shake. I was surprised when the audience clapped and laughed in the middle.

There was a twist towards the end

Foreign reporters asked me if I liked to be in depressing and thrilling movies. I couldn't help it. I personally do like thrillers and I become picky about it. "The Office" was something that broke my stereotype about thrillers. It's a whole new thing.

Could you relate to office workers?

I thought being an actress and an office worker were clearly different jobs but now that I think about it, I don't think so. I can't understand them perfectly but I tried. I have a role model for my future. I can't say who but I followed that person around and even sat at the desk.

What have you realized through your observation?

The office was noisier than I thought. I wondered how they concentrated on their work in such an environment. I also found out there was politics in the office.

Is there politics in acting too?

Do you know anything about politics?

I am homeless when it comes to politics. I have no care for politics as if I don't exist in this society.

Is there anything Yu Jun-sang from "Heard It Through the Grapevine" told you about Cannes? He was here last year.

He told me not to be taken aback by the people.

There was some action in the movie

I hoped for it to be fun and not gruesome. I lost a toe nail while doing it so I took a week or two off.

It seems like you're playing more roles your age now

I can't always do what I want. There is something I have to stand down for. Being a child actress can't be forever. If I age more I'll be doing kiss scenes and there's always a step. The older I get, I'll be playing more sincere roles but "Heard It Through the Grapevine" betrayed all my thoughts. I had a kid from the beginning.

In "The Office" you play your age. Is there anyone of your friends who are interns?

All my friends were interns while I filmed the movie. I asked them all the time about things I wanted to know. Even my sister was an intern.

If Mi-rae were an actress, wasn't she moved back in terms of casting? Have you had that experience too?

Of course I have. There's no one who hasn't been. I debuted in 13 but I've been auditioning since 4. I only made it when I was 13.

I am only an intern since I was also on the list of rookies.

You have a lot of experience in foreign projects and movie awards. You are here with Hong Won-chan and actor Bae Sung-woo. Did you feel like you had to lead them?

I didn't feel like that at all. All those trips abroad did help me. The Busan International Film Festival was the first domestic award show I have ever been to. But I think foreign award shows are better than domestic. There are more people who don't know me so it's convenient in a way.

There must be many grown-ups who think of you as their daughter or sister since you've been acting since a young age.

Tilda Swinton, I see her a lot. I meet her at least twice a year. We talk on the phone or see each other at events. I met her at a Chanel show recently. We support each other from afar.

They say you change when you become famous. Is there anything you have a problem about?

That moment came for me quickly. The first movie I did was "The Host" and I took advantage of the situation. However, I was surprised to find out it wasn't. "The Host" and "Snowpiercer" was great projects but there are some that weren't successful too.

"[The 68th Cannes - Interview] "The Office" Go Ah-sung, "I'm just an intern""
by HanCinema is licensed under a Creative Commons Attribution-Share Alike 3.0 Unported License.
Based on a work from this source