"The Assassination" VS "Veteran" VS "Memories of the Sword" 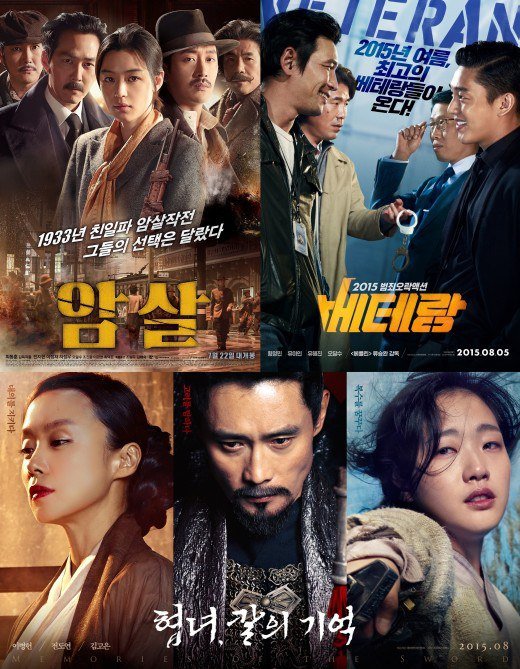 Summer is the time when the theaters are most competitive. July is near and blockbusters which cost more than 10 billion won, took the plates.

Distributors of these blockbusters spend many sleepless nights during the summer season. "The Admiral: Roaring Currents" set a record last year that no one can break, but this year, it's different.

Three distributors have come out with major films that no one knows of yet. There are only rumors.

However, each of these movies have a story to tell. The three distributors have no choice but to hold it in until the public has a say.

Showbox was first to throw out a hat into the ring.

Based in Shanghai in the 1930s, a group of assassins are called in to wipe out the pro-Japanese. "The Assassination" comes out on the 22nd of July. Showbox gathered 10 million people with "The Thieves" in 2012 and is challenging its own record with director Choi Dong-hoon.

Showbox is determined to recover the loss of "KUNDO : Age of the Rampant" with "The Assassiantion". "Kundo" was first to come out last year but was no match for "The Admiral: Roaring Currents".

The second distributor CJ E&M is out with criminal movie "Veteran".

"Veteran" is about a group of investigators who track down a snobbish third generation plutocrat starring Hwang Jung-min who starred in "Ode to My Father" last year. The movie is out on the 5th of August.

"Veteran" was lined up for release in May but internal reactions pushed it to August.

CJ E&M initially chose "Terminator Genisys" as its movie of the year but lost it and didn't have anything to bring about in the summer. However, "Veteran" came along and it became the savior that was going to recover the company image.

- Lotte Entertainment – "Memories of the Sword "

The final distributor is Lotte Entertainment. There were many ups and downs until it made its decision.

Lotte is coming out with "Memories of the Sword" at the end of August. At the end of the Koryeo Times, the best female sword fighter was a woman who had to hide her identity and sought to avenge her teacher and mother's death.

Lotte Entertainment is the only one without a 10 billion audience record. This summer, it hopes to break the record. The public's view of Lee Byung-hun is still not so warm although they have to admit, he's a good actor.

""The Assassination" VS "Veteran" VS "Memories of the Sword""
by HanCinema is licensed under a Creative Commons Attribution-Share Alike 3.0 Unported License.
Based on a work from this source