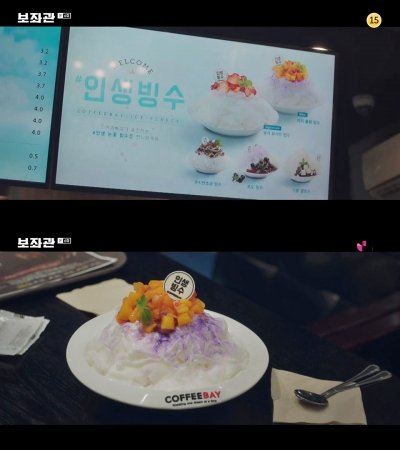 Coffee brand Coffee Bay is gaining popularity ever since it appeared in the jTBC drama "Chief of Staff".

On the episode of "Chief of Staff" on the 29th of June, Jang Tae-joon (Lee Jung-jae) and Kang Seon-yeong (Shin Min-ah) enjoyed a date while eating 'Life Bingsu' at Coffee Bay.

The menu they had was the Peach Plum Bingsu, a combination of peach and plum with shaved ice.

Other than that, Coffee Bay introduced five kinds of snowflake shaved ice and four kinds of ice shaved ice for the summer season, and is driving sales of its franchise stores for that time.

Coffee Bay CEO Baek Jin-sung said, "We are experiencing marketing effects, as request for certain menus at Coffee Bay have gone up right after the drama broadcasted. Through further production support, we plan on increasing recognition for the brand and franchise sales".

"The Bingsu From JTBC Drama "Chief of Staff" Becomes a Big Hit"
by HanCinema is licensed under a Creative Commons Attribution-Share Alike 3.0 Unported License.
Based on a work from this source