The Changing Landscape of Film Directors Going Into Drama 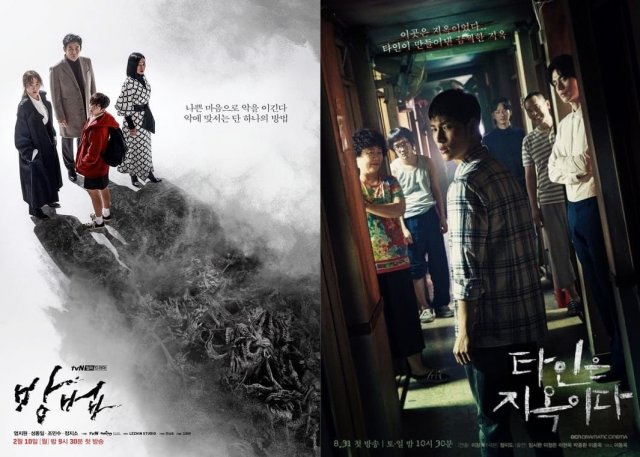 Recent hit dramas like tvN's "The Cursed" and Netflix's original series "Kingdom - Season 2" share the common factor that they were handled by movie makers. "The Cursed" was in sync with director Yeon Sang-ho, who made the films "Train to Busan" and "Psychokinesis" and Kim Yong-wan, director of "Champion". "Kingdom - Season 2" was handled by Park In-je, who created "Moby Dick" and "The Mayor" taking over the baton of season 1 director Kim Seong-hun.

"The Cursed", a Korean-style supernatural thriller, ended on the 17th with a 6.7% viewership rating and "Kingdom - Season 2" is drawing attention from all around the world, creating a 'K-Zombie' craze. The two works, in particular, received favorable reviews as "film-like dramas" in the making.

It's been a long time since the barriers between movies and dramas began to break down, but recently it's been speeding up. In the past, when a movie director produced a drama, it was looked at as 'outrageous', but from more than a decade ago, it is recognized as the ability created by 'a wider greed for work'. On top of this, viewers and movie audiences have higher standards, and as platforms become more diverse, works that combine the strengths of the two media are continuously pouring out.

It was in the early 2000s that movie directors began making dramas. "Ghost Mama" and "A Day" director Han Ji-seung's 2006 "Alone in Love" was a hit. Led by Kam Woo-sung and Son Ye-jin, the drama was about the detailed portrayal of the psychology of a man and a woman who can't let go of each other even after getting divorced. It's a well-made drama that's still being talked about 10 years later today and the final episode holds a viewership of 16.9%.

Director Yang Yoon-ho, who created "Riverame" and "Fighter in the Wind", created the 2009 Lee Byung-hun and Kim Tae-hee drama "IRIS", creating a mega-hit on his first try. The smooth combination of colorful action and heartbreaking melodrama caused a sensation, surpassing 35% in viewer ratings.

Movie makers' advancements in drama that were centered around ground-wave dramas are now revolving around CJ ENM and OCN as well as tvN. Director Kim Hong-seon-I from "The Age of Blood" created the tvN drama "The Guest - Drama", which opened opportunities for Korean exorcism dramas. Despite being aired at the late time of 11PM, the drama ended with a viewing percentage of 4.1%. Viewers said 'it was like watching a well-made horror flick' and look forward to season 2.

Director Han Ji-seung released OCN's "Mistress" and director Kim Jong-hyeon released "Priest". The viewership wasn't so great, as it stayed as low as 1~2%, but it was meaningful in that they were a mystery based on female characters and s work that emphasized Western exorcism.

In early February last year, OCN declared deeper collaboration with the film industry than ever before, with the title "Dramatic Cinema". The first piece of work was "Trap - Drama" directed by Park Shin-woo-I, director of "White Night" (2009) and "An Ethics Lesson" (2016). It exceeded 4% in viewer rating due to its pre-production and highly packed story.

Lee Chang-hee, who created "The Vanished", also created the second Dramatic Cinema that aired the same summer, called "Strangers from Hell". The drama, based on a webtoon, was judged by its cruel scenes, but was recognized for its genre quality. Viewers responded to the story and sensuous production that they have never seen before in dramas. The ratings for the last episode hit 3.9%, marking its own high.

In upcoming May, director Kang Hyo-jin, who produced the movie "The Dude in Me" will direct "Team Bulldog: Off-duty Investigation" starring Cha Tae-hyun on OCN. It is the third Dramatic Cinema project.

There is also jTBC's "Be Melodramatic", which aired in the second half of last year. Lee Byeong-heon-I, the director of "Extreme Job", which drew 16 million viewers, first challenged himself with a drama. The drama, which deals with the work, love and life of women in their 30s, was the most talked-about drama in the 1% range. This is because he has delved into the psychology of wandering and agonizing youth.