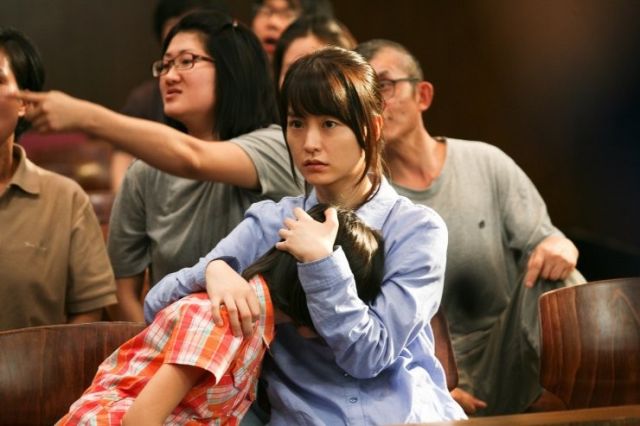 An article has come out in The Korea Times and many other places since then, about the stir "Silenced" has caused. Thousands of Korean netizens and bloggers, along with Daum have shown their support for the people who suffered through this case and also demanded for change.

I was very happy to hear about this. Netizens are not my favorite people, as the main volume of them I usually hear about or experience are ruthless, violent and brainless, but it seems decent people are active online as well. I've been following this movie ever since I heard news of it and it's been my hope that it would succeed in raising awareness on such a big issue. And unfortunately, it's a global issue. Children are the future "us" and we owe us both a better world.

But this is one side of the coin called "netizens" in this commotion around  "Silenced".

It seems some have voiced complaints about the movie showing the sexual abuse of children and not having a happy ending. I was quite dumbfounded when I read this. I know people can be dim, but being an optimist in general, it never ceases to amaze me how dim people can really be. Or maybe just bitter and unsympathetic.

Everyone who knows me also knows I usually hate and avoid sad endings. I avoid tragic movies, movies with illnesses or movies that look like they'll end badly. I get easily depressed with such works and prefer to "escape" to a nicer place through my entertainment. However, I have also said that if the tragedy is there for a solid reason, then I approve of it. I've watched movies on war, diseases, tragic love stories and I have loved them. I just chose carefully.

Some movies and dramas seem to be sad just for the sake of being sad and to cover how shallow and trivial their approach to a subject is. They are tear-jerkers. They are just after depressing audiences, not moving them and touching their hearts. And everyone who is sensitive (or a teenage girl) enough somehow see it as "poignant" and "deep". Tragedy without meaning is just a way to get your audience to a vulnerable enough state that they think you had something to say.

Which brings us back to this movie. The movie is based on a book written on a true crime. The case was closed and the people responsible for molesting children got off easy or didn't even receive any punishment. So why would the movie have a happy ending when the case didn't? And why wouldn't they show what happened to these children who didn't get justice? 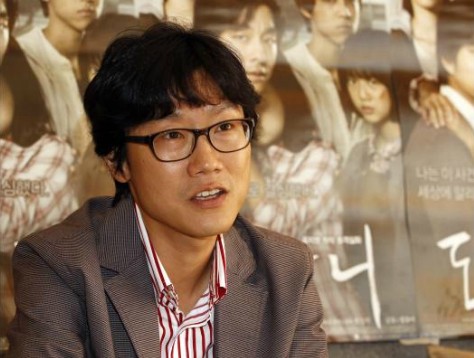 Director Hwang Dong-hyuk - Picture taken from the video of The Chosun Ilbo.

The whole point of the movie is to raise awareness and unleash Hell upon these people. And you complain about a sad ending? This isn't a romantic comedy made to cheer you up. You are walking into a theater to view a movie on child abuse. If you were expecting unicorns and rainbows, I am really surprised you can even get up and get dressed in the morning without major injuries.

There are also those who might complain about child actors being in such scenes and I understand their worries, but consider something here. I know the movie is graphic and looks very real, but have you ever seen a set? There's dozens of people around, parents, other actors and the people playing these monsters aren't the character they are portraying. If any movie would care for the well-being of its child actors, it would be this one.

I feel that the buzz around this movie and the incidents at this school is like every other event which goes against denial and covering up our problems as societies. They are eye-opening events for those involved and also those observing. They reveal so many sides of people and they have a different impact on each and every one of them.

Some chose to get angry with the work revealing the injustice and not the injustice itself. They are the ones who can't let go of their denial. Some are genuinely touched by it and do their best to do their share as part of a society which didn't care enough and let people get hurt. Some join the cause because it is popular and they want to feel they are doing something, but will give up and forget about justice the minute some other cause rises for them to use in order to be following the "trend" and buying off their guilt.

But no matter which category one belongs to, we live in a world where many are willing to join a cause, but few are willing to really fight for it. Baby steps and little triumphs are sometimes all we can hope for.

I've seen enough to know the real guilty ones are rarely punished and money talks and it talks loud. It's the same thing in my country and no matter how nice things may seem, it's the same for the whole world. I don't expect this to change that world or even South Korea. But in this unfair reality, small wins can mean the world to someone. Such as these victims.

Here is the first article from The Korea Times and here is the one talking about the complaints, taken from The Chosun Ilbo.

"Silenced - Two Sides of The Netizen Coin"
by HanCinema is licensed under a Creative Commons Attribution-Share Alike 3.0 Unported License.
Based on a work from this source