"The Culprit", Song Sae-byeok and Yoo Sun's Thriller to Come Out in July 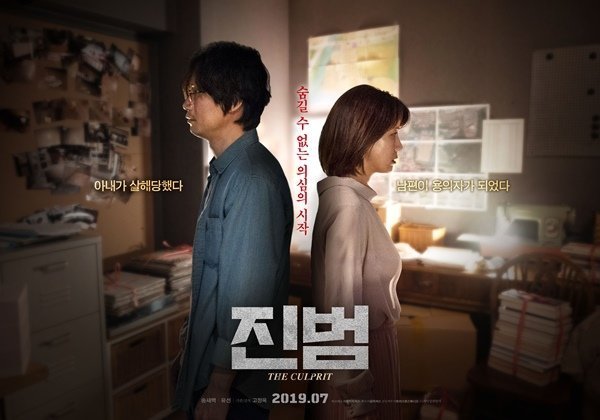 "The Culprit" is coming out in July.

"The Culprit" is about a man named Yeong-hoon who tracks his wife's killer and the tale of his search for justice. The teaser poster came out on the 29th.

Song Sae-byeok plays Yeong-hoon, the man who loses his wife and investigates back to the night she died to find the truth.

Yoo Sun plays Da-yeon, the wife who tries to prove her husband innocence when he's pointed out as the suspect of the case.

The collaboration of producer Go Jung-wook, who captured the hearts of the audience at the Mise en Scene Film Festival and Bucheon Film Festival, and the production crew from "The Witch : Part 1. The Subversion", "Hide and Seek" and "Bluebeard" draws a lot of attention.

The teaser poster shows the victim's husband, Yeong-hoon, and the suspect's wife, Da-yeon, who have to collaborate in order to discover the truth, even through growing suspicion. They are standing back-to-back looking at different directions, which hints that they have different objectives. The copy on the poster, 'My wife has been murdered' and 'My husband has become a suspect', sparks curiosity about the ironic encounter of the two. The copy 'The beginning of a suspicion that can't be hidden' describes the complex psychology of being faced with chaotic situations as the truth is dug up, suggesting the intense thrill of pushing and pulling by the two figures.

"The Culprit" comes out in July.

""The Culprit", Song Sae-byeok and Yoo Sun's Thriller to Come Out in July"
by HanCinema is licensed under a Creative Commons Attribution-Share Alike 3.0 Unported License.
Based on a work from this source