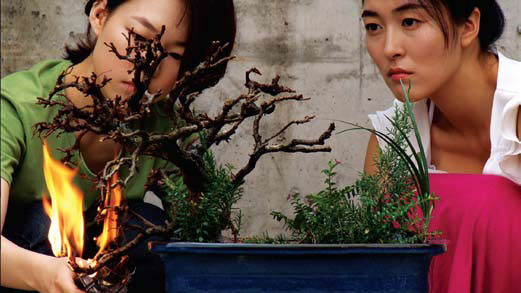 If there is phrase that seems to have been decorating various press coverage related to the 12th Jeonju International Film Festival (JIFF) held from April 28th to May 6th, it will be 'leaps and bounds in Korean Cinema'. In fact, there never has been a year that the JIFF has taken particular interest and care in the local film industry as this year. And to prove that it truly has taken leaps and bounds, 57 of the total of 190 films to be screened at this year's festival are Korean films.

The most outstanding point about this year's Korean film programming is that the 'International Competition' section introduces its first Korean film since its inception with Kim Kyung-man's documentary, "An Escalator in World Order". Documentary films are usually understood as 'objective documentations' of actual events and people, but there are also documentaries that create new meanings by re-editing exiting visual documentations rather than using footage shot for the film. These types of films are called 'compilation film (edited film)' and it is this approach added by self-shot footage of various images of Korea that director Kim Kyung-man uses in this highly-creative documentary. Throughout the film, "An Escalator in World Order" he selects U.S.-Korea related footage from official government archives and chooses to expose them to disclose the suspicious and secretive relationship of these two nations or to be more specific, Korea's megalomania and its one-sided love for the U.S. along with America's arrogant stance to proclaim itself as the No. 1 world power. This documentary film almost elevates this observation to a religious level, exposing how overwhelming the irony between the vast narrations and images are.

A significant aspect of the films selected in this year's Korean feature section is also the strong line-up of documentary films. Like the saying, "There is nothing new underneath the sun" feature films are faced with a shortage or probably an exhaustion of film aesthetics and fictional imagination, whereas documentaries hold unlimited potential in its fundamental nature of being able to use the ever-so-dynamic reality as its starting point. But the fact that Korea's current reality is dynamic and dramatic enough to overwhelm any fiction may as well have had a noteworthy impact on the quantitative and qualitative increase and strong presence of this year's Korean documentaries. The films that will be showcased in this year's Korean feature competition such as "The Color of Pain", "Out of the Cave", "The Time of Lovelessness", "Anyang, Paradise City", and "The True-taste Show" are some of the most innovative and experimental Korean documentaries that have proven themselves to be at the forefront of aesthetical accomplishment.

On the other hand, frankly speaking, the division between 'Documentary vs. Feature' films is questionable. For example, Park Chan-kyong's "Anyang, Paradise City" (which won the top award at the Korean Feature Films Competition and the Closing Film of the 12th JIFF) is an essay film that shifts between fiction and documentary while AHN Kun-hyung's "Out of the Cave" can also be seen as an essay film. There is no need to rigidly define this film which starts from a reality-based problem between a family and their cat but then at one point stretches into a meta-film which contemplates what film and images are. As they shift between documentary and fiction, these films which sensitively respond and reflect upon content and format eventually show how they can exist as a significant movement.

Lee Kang-hyun's "The Color of Pain" which observes the nationwide reality of healthcare in the industrial workplace attempts at an in-depth reflection of the relationships between the world of traditional manual labor, cyber network and leisure activities represented in the form of photography as a popular hobby by presenting a loose survey of them. "The Color of Pain" seems to lean towards objective documentation, but at one point shifts into a dreamlike sensibility by employing a slight cacophony between image and sound, and as a result creates an ambiguous aura to the film. Meanwhile, "Out of the Cave" starts as a film about a cat which becomes a hodgepodge story of a family and then in the end evolves into a meta-criticism of image or the act of reconstruction. As it compiles bits and pieces of observations and stories, this film eventually displays its strength as a powerful work in structure and development by giving new meaning to such stock information.

Kim Hee-chul who at an earlier JIFF showcased "The Gate of Truth", an investigation surrounding the truth behind a questionable death that occurred at the Joint Security Area (JSA) in 2004 returns with the sequel-like "The Time of Lovelessness". Six years have passed since the making of "The Gate of Truth" and this film connects the death of First Lieutenant Kim Hoon and the late President ROH Mu-hyun under the same context to constantly question the issue of violence that permeates Korean society. As the film continuously presents the image of the director himself pointing a gun to his head through a monitor, the film refuses to find a specific answer, but defines itself as a subjective process which strives to find meaning through an endless trail of questions. Finally, Kim Jae-hwan's "The True-taste Show" boldly exposes the fabricated and deceptive reality of so-called 'good taste' diner and restaurant introductory broadcast shows. The director, a self-claimed whistle-blower well-aware of the deceitful nature of Korean television broadcasting, he opens a diner himself and solicits a broadcast coverage in an attempt to disclose this reality. A provocative piece which adopts the exterior of a TV documentary, the film exposes truth that could never be revealed on broadcast TV by incorporating a proactive format.

"The Current Trends in Korean Cinema at the 12th Jeonju International Film Festival"
by HanCinema is licensed under a Creative Commons Attribution-Share Alike 3.0 Unported License.
Based on a work from this source