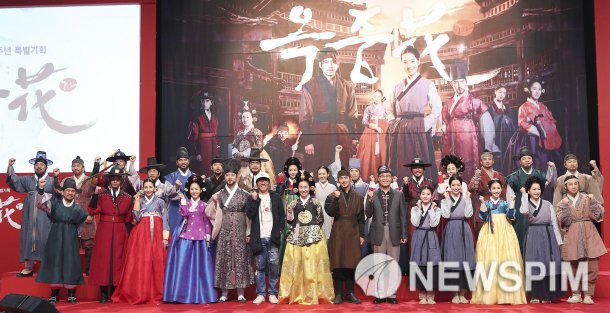 Go Soo and Seo Ha-joon are disappointed "The Flower in Prison" is over.

Go Soo who played Yoon Tae-won said, "A long 7-month journey is over. It was the longest historical drama for me so it's special for me. I am grateful to director Lee Byeong-hoon and the entire cast for making this happen".

Seo Ha-joon played Myeong Jong said, "Thank you everyone who watched the drama all the way to the end. It was an honor. Although I joined the drama in the middle for 6 months, I learned and experienced so much from it. It was an honor to work with everyone and thank you once again".

Meanwhile, "The Flower in Prison" ended with 51 episodes in which Ok-nyeo (Jin Se-yeon) and Yoon Tae-won defeated the bad and Jeong Nan-jeong (Park Joo-mi) and Yoon Won-hyeong (Jung Joon-ho) killed themselves.

""The Flower in Prison", Go Soo and Seo Ha-joon's final goodbye "
by HanCinema is licensed under a Creative Commons Attribution-Share Alike 3.0 Unported License.
Based on a work from this source