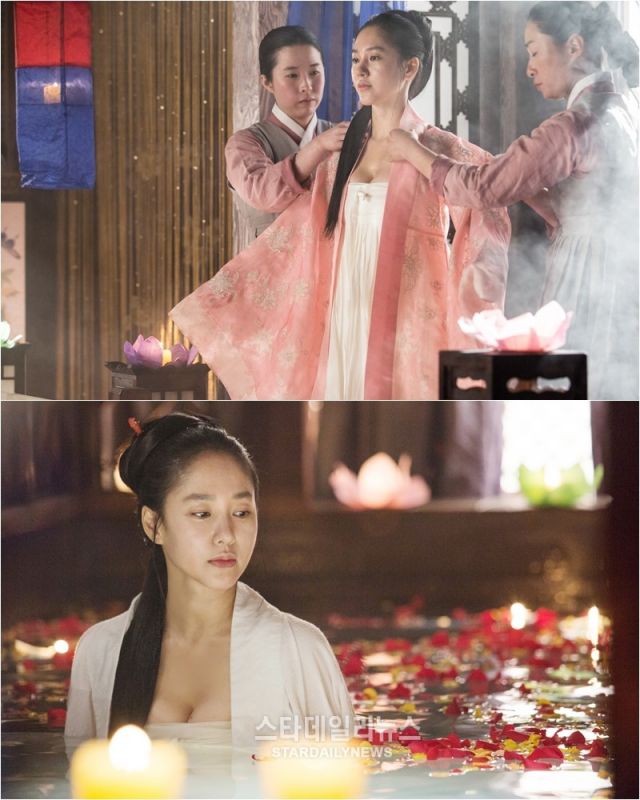 The MBC 55th Anniversary Special drama "The Flower in Prison" released stills of Park Joo-mi who takes on the role of Jeong Nan-jeong.

Park Joo-mi's role of Jeong Nan-jeong is a former slave turned gisaeng who was degraded from being an aristocrat. Her beauty and gift of speech results in her becoming the concubine to Empress Moon-jeong's (Kim Mi-sook) brother Yoon Won-hyeong (Jung Joon-ho) and enjoys all the riches. She falls into conflict with Ok-nyeo (Jin Se-yeon) and Yoon Tae-won (Go Soo) in the end.

The stills show Park Joo-mi enjoying a fancy bath. Her bath is decorated with various colorful lanterns, candles and flower petals which reflects her power and luxury. She leaves her body up to her slaves who undress her.

Meanwhile, "The Flower in Prison" is an adventure historial drama about a genius girl named Ok-nyeo who was born in prison and a mysterious character named Yoon Tae-won.

""The Flower in Prison" Park Joo-mi takes a bath, never-aging beauty"
by HanCinema is licensed under a Creative Commons Attribution-Share Alike 3.0 Unported License.
Based on a work from this source