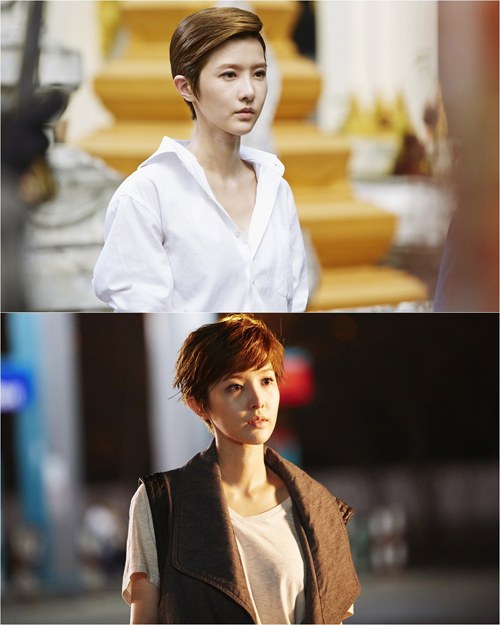 Kim Yoo-ri had her cut short.

She takes on the role of a cheeky fraud called Seo Jane in the new KBS 2TV drama "The Full Sun".

The stills of her look boyish but cold at the same time. This is her first time cutting her hair that short.

Kim Yoo-ri's character of Seo Jane is so bright and cheerful it makes one wonder how she became a fraud but she's hard to read. She is also torn between the romance with Yoon Kye-sang (Jeong Se-ro) and Cho Jin-woong (Park Kang-jae).

Currently in Thailand for the drama, Kim Yoo-ri is passionate about her work. She's been taking part in her styling as well as her acting and is synchronizing perfectly with the character of Seo Jane.

A "The Full Sun" crew member said, "She's one of a kind this time and Seo Jane is going to steal the attention of all the viewers. Her bold but carefree character is part of her friendliness as well and we can expect many things from Kim Yoo-ri".

Meanwhile, "The Full Sun" is about a man and a woman whose lives completely change after a shooting incident and is highly expected by many.

Kim Yoo-ri, the chic and proud actress can be seen on the 10th of February after "The Prime Minister and I".

""The Full Sun" Kim Yoo-ri's first short hair cut"
by HanCinema is licensed under a Creative Commons Attribution-Share Alike 3.0 Unported License.
Based on a work from this source