The Hallyu map: Lee Min-ho and Song Joong-ki in Asia and Psy in the Americas and Europe 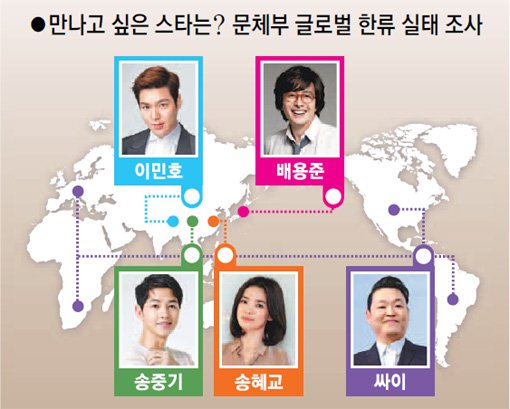 Hallyu stars have been placed all over the maps according to their popularity. Lee Min-ho, Song Joong-ki, Song Hye-kyo and Psy have been active in the Americas, Europe and Asia and they have been forming indicators on the maps of countries they have targeted. These are the results of the survey conducted by the Ministry of Sports and Tourism and the Korea Foundation for International Culture Exchange of 7,200 men and women who have experienced Hallyu contents between the ages of 15 to 59.

Lee Min-ho came in first and Song Joong-ki came in second in Asia. Lee Min-ho owes this popularity to his consecutive dramas such as "The Heirs" and "The Legend of the Deep Blue Sea".

Song Joong-ki and Song Hye-kyo are especially popular in Taiwan and China thanks to "Descendants of the Sun". The drama was simultaneously broadcasted in China and recorded over 100 million hits. It's been six months since the end of the drama, but it's still a huge deal.

Psy's "Gangnam Style" came out 5 years ago, but it's still on-going. The music video for the song in 2012 was explosively popular on YouTube and it was even on the Billboard Charts. Psy targeted North America and Europe. There wasn't another hit song to take over "Gangnam Style" but it's still one of the most popular songs in North America, Brazil, France, England and South Africa.

Bae Yong-joon has gone under dormancy after the 2011 drama "Dream High" but his popularity from the year 2000 drama "Winter Sonata" still stands strong in Japan.

"The Hallyu map: Lee Min-ho and Song Joong-ki in Asia and Psy in the Americas and Europe "
by HanCinema is licensed under a Creative Commons Attribution-Share Alike 3.0 Unported License.
Based on a work from this source