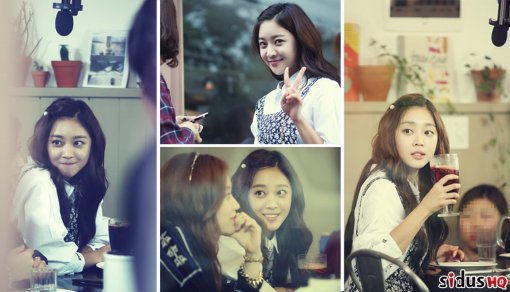 Actress Jo Bo-ah's flowery smile has men all over her.

Pictures of Jo Bo-ah on the set of the tvN drama "The Idle Mermaid" were released.

Sidus HQ released these pictures on its official Twitter saying, "Behind-the-scene cuts of Jo Bo-ah released! Will she succeed in getting a job and get a step closer to Song Jae-rim? Don't forget to watch "The Idle Mermaid" at 11PM if you want to find out!"

Jo Bo-ah in the pictures is smiling so brightly, playing the role of Honey in the drama. Her long wavy hair makes her look very feminine and the suspended skirt makes her seem cheery. She's also becoming more and more fashionable with every episode despite the fact that she's a mermaid-turned-human.

Not only that, her natural beauty is radiant enough to make the pictures look like a pictorial while raising anticipation for the drama.

""The Idle Mermaid", Jo Bo-ah's pretty smile"
by HanCinema is licensed under a Creative Commons Attribution-Share Alike 3.0 Unported License.
Based on a work from this source