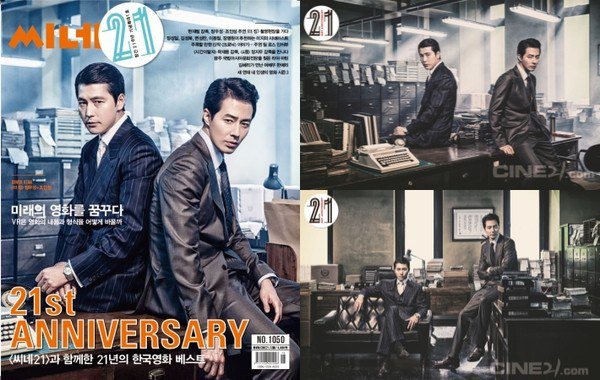 "The King" Jo In-sung and Jung Woo-sung were featured on the front page of Cine 21's 21st Anniversary Special Issue.

"The King" is the project of a man who struggles to become the king in a world of power starring Jo In-sung, Jung Woo-sung, Kim Ah-joong, Bae Sung-woo and Ryu Jun-yeol.

Cine 21 has the longest publishing history in Korea. The cover story for Cine 21 this month took place in Busan where the movie was being filmed.

Cine 21 said, "Although Jo In-sung and Jung Woo-sung are close, they have never met like this before. In the movie, they perform roles that's new to them. Also, the anticipation for the movie is high".

Jo In-sung takes on the role of Park Tae-soo who tastes power and dreams of success. Jung Woo-sung plays Han Kang-sik who brings Park Tae-soo into the world of power and use him as his own hands and limbs.

"The King" was completed in 2015. The production cost alone cost 10.4 billion won and cranked in this February. The movie comes out this winter.

""The King" Jo In-sung and Jung Woo-sung in portrait-like double shot"
by HanCinema is licensed under a Creative Commons Attribution-Share Alike 3.0 Unported License.
Based on a work from this source