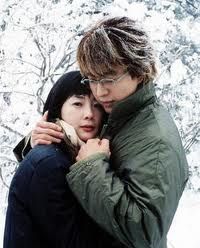 About the origin of "Hallyu"

It was 2003, and Japanese viewers  by the droves  were enchanted with "Winter Sonata", a Korean television drama on the NHK satellite channel. Bae Yong-jun, the main star, was an overnight success in Japan, as well as his female counterpart, Choi Ji-woo. That's when the word "Hanryu" became popular in Japan. It means "Korean Wave". And Bae Yong-joon went on to become one of the highest-paid actors in Korea.

In the late 1990s the first mention of a "Korean Wave" was from a Chinese journalist. The fast-growing popularity of Korean TV dramas and entertainment in China led to the creation of the word "Hanliu". As Chinese, Korean and Japanese say the same thing for "Korean Wave", it's "Hanliu", "Hallyu" and "Hanryu" respectively.

Today Korea is one of the top 10 countries exporting culture. What began with television series, like "Winter Sonata" and "Autumn in my Heart", moved over to movies, where new directors made cinema in a fresh style. Pop music, design, food and language are all a part of "Hallyu". As an example: KBS (Korean Broadcasting System), a major television channel, exported in 2005 $43 million in programs. In 2009 it was already $65 million.

Many journalists and scholars have written about "Hallyu". They claim that the Korean Wave has been more successful in East Asia and South East Asia because of the value place on Confucian themes dealing with love, family and filial piety in an age of new technologies. Many disagree with that. While that may apply to certain television dramas, such themes are not the focus in many of the most successful exports. It simply comes down to making engaging entertainment, driven by creative talent.

Meanwhile the Korean Wave isn't stopping, and from Asia has reached the shores of the U.S. and Europe.