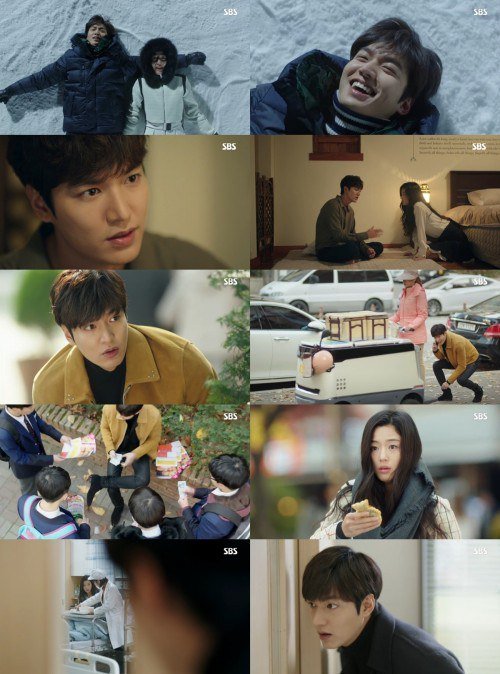 With the seventh and eighth episodes coming up, the SBS drama revealed 5 points of actor Lee Min-ho who plays Heo Joon-jae. Heo Joon-jae acts cold towards the mermaid Sim Cheong (Jun Ji-hyun) but actually cares for her and protects her. Everything he does and says is becoming the hottest topic online. Let's take a look at some heart-throbbing scenes.

They headed for a ski resort for Sim Cheong who wanted to see snow and he taught her how to ski. However, Sim Cheong went downhill before he was done teaching her and Joon-jae went down faster that her to stop her by catching her in his open arms. She crashed into him and they fell on the snow.

Joon-jae said, "Did you know that I just saved you or not?" Sim Cheong replied, "I know". There wouldn't be anyone who would refuse to reply him when he speaks in such a low seductive voice.

Joon-jae was singing a love song in church and Sim Cheong asked what 'love' is. He explained, "When you love someone, it means you surrender. That's losing. If you love someone, you'll get to believe anything he says. That's not good. Should you say something like that to someone or not?"

He explained it to her like a child and looked to see if she understood or not. Cheong's answer was, "I should, I love you" and his efforts went up in smokes but everyone understood how Cheong felt.

- Cold but warm, kicks her out and then keeps tabs on her

Joon-jae gives Cheong a phone and a bus card. Then he tells her if she doesn't tell him what happened in Spain, she would have to leave the house. However, he had tabs on her through her cell phone. The GPS on her phone was on and he was able to see where she was the moment she stepped out of her house. When he saw that she was crossing the Han River, he was shocked and went out to find her. He's worried about her after sending her out.

- From the flyers to the snacks

Joon-jae discovered Cheong making money by giving out flyers on the streets. He parked his car by the street and watched her. He saw her getting scolded by her employer and reported his car for illegal parking.

Then he gave out 1,000 won for every flyer students brought to him. He then got someone to present her with hot buns and a neck warmer. When a man approached her for her phone number, Joon-jae called her and warned her not to give anyone her phone number.

- Smug about the happy meal

Cheong was hospitalized for a car accident and she couldn't eat just in case she went in for surgery. She was devastated that she couldn't eat and called Joon-jae half crying. He hung up the phone on her because she was crying about a bowl of noodles but he then called the hospital and argued with them for not letting her eat. Thanks to him, she got her 'happy meal' in the morning and he watched her eat from outside.

He was so smug about it but then saw himself being smug and hit himself in the back of the head. Cheong called him happily saying that she got her 'happy meal' but he hung up on her saying he was busy.

"The Legend of the Blue Sea" can be seen every Wednesday and Thursday at 10PM.

""The Legend of the Blue Sea" Lee Min-ho's 5 hot points "
by HanCinema is licensed under a Creative Commons Attribution-Share Alike 3.0 Unported License.
Based on a work from this source