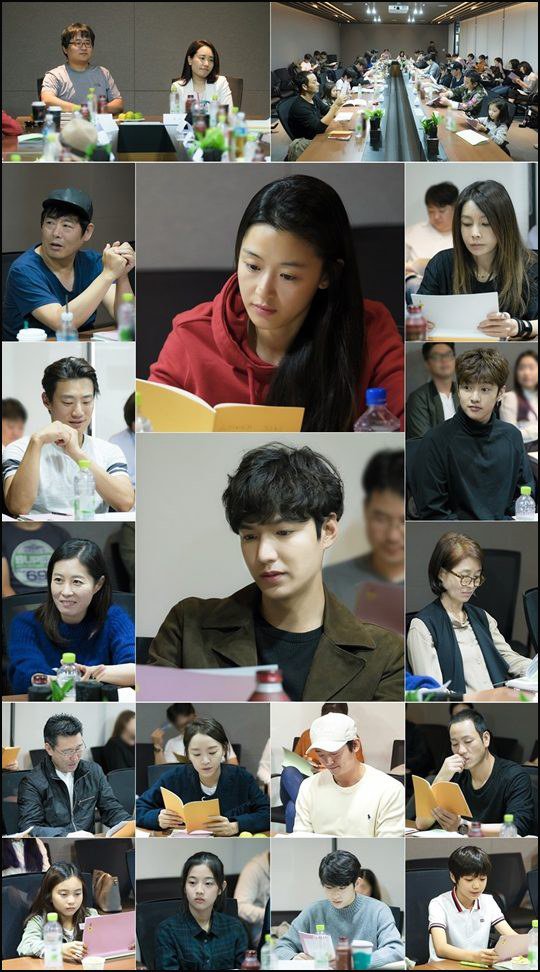 The script reading for the new SBS drama "The Legend of the Blue Sea" was held.

"The Legend of the Blue Sea" is a fantasy romance drama about the last mermaid on Earth meeting a genius fraud and living on land.

Writer Park Ji-eun started the script reading with a speech.

Jun Ji-hyun takes on the role of the last mermaid. She led the script reading with laughter in between her lines and she managed to pull off the unique role with her unique performance.

Lee Min-ho plays the genius fraud and along with his performance, Sung Dong-il, Hwang Shin-hye, Choi Jung-woo, Shin Hye-sun, Lee Ji-hoon-I, Park Hae-soo, Lee Jae-won and the others did their best to read their lines.

The younger version of the mermaid is played by Kal So-won and Shin Eun-soo.

Jeon Jin-seo and Jinyoung play the 'little frauds' as well.

"The Legend of the Blue Sea" will be released on the 16th of November at 10PM.

""The Legend of the Blue Sea" script reading with Jun Ji-hyun and Lee Min-ho"
by HanCinema is licensed under a Creative Commons Attribution-Share Alike 3.0 Unported License.
Based on a work from this source