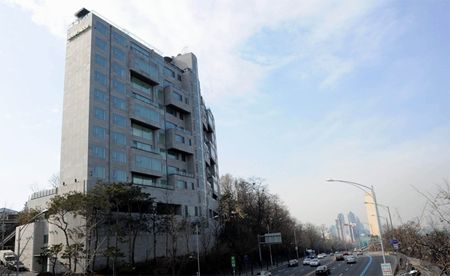 Sports, TV and movie stars are the envy of many, and that has if anything increased with the revelations of their vast real estate holdings. Although such cases are limited to only the highest-paid stars, many stars show a keen interest in investing in real estate due to their lack of job security.

But industry experts say in case of athletes whose careers span no more than 15 years at most, the sums are not excessive. And celebrities' careers ebb and crest with their popularity, giving them little choice but to set aside investments whose returns they can live off for the rest of their lives.

Most of them own commercial real estate worth millions of dollars in the affluent Gangnam district of southern Seoul. What follows is a round-up of the real estate owned by celebrities.

Pop star Seo Taiji, who bought a building in Nonhyeon-dong in 2002, already made millions of dollars in profit. One estate agent said the building is presently valued at close to W20 billion (US$1=W1,134). Its value recently got a boost because a subway station on Line 9 was opened nearby.

Slugger Lee Seung-yop bought a building in Seongsu-dong for W42 billion in July of last year. Basketball player Seo Jang-hoon owns a building near the Yangjae subway station in Seoul. Actor Ryu Si-won bought a piece of land in Daechi-dong in 2008, built a building there and named it "106" after his birthday on Oct. 6 and rents out units. Singer Rain bought a building in Cheongdam-dong for W15 billion back in 2008.

Actor Jang Dong-gun, who is soon to wed actress Ko So-young, grabbed headlines recently after buying a W3 billion villa in Heukseok-dong. Ko also owns her own building in Cheongdam-dong. She is a veritable real estate tycoon, because she also owns around W20 billion worth of other properties including a house in Nonhyeon-dong, where here parents live.

Star couple Cha In-pyo and Shin Ae-ra purchased a building in Cheongdam-dong in 2008, which presently houses a school. Lee Seung-chul bought land in Samseong-dong in 1999 and built his own building there, which he uses as his recording studio and office. Shin Seung-hoon also bought a W5 billion to W6 billion building in Sinsa-dong and uses it as his own recording studio while letting other units.