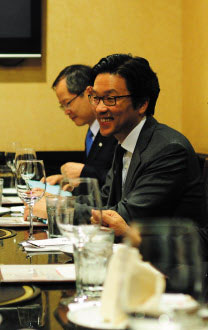 The man in his 30s seen smiling next to Korean President Lee Myung-bak and across from U.S. President Barack Obama in a Korean restaurant in suburban D.C. on Wednesday afternoon is Kim Il-beom. Kim, a diplomat in the protocol division of the Foreign Ministry, has been Lee's interpreter since he was elected in 2008.

The son of Kim Se-taek, a former ambassador to Singapore and Denmark and consul general in Osaka, Japan. Kim joined the ministry in 1999 through a job opening for top linguists.

His language skill stands out even within the ministry, whose staff mostly consist of fluent speakers of foreign languages, and he translated for former president Kim Dae-jung in his later years and for Roh Moo-hyun in his early years as president.

In May last year, Kim made headlines with his marriage to actress Park Sun-young after seven years of dating.