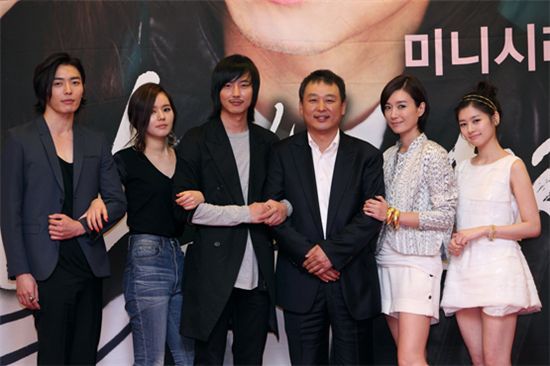 Rain and Gong Hyo-jin in KBS TV series "Sang Doo! Let's go to school", So Ji-sub and Lim Soo-jung in "Sorry, I Love You", Hyun Bin and Sung Yu-ri in "The Snow Queen". Director Lee Hyeong-min of TV series "Bad Man", currently in negotiations to confirm its broadcast on SBS in May, possess an exceptional "feeling" that have brought out maximum synergy effect from his lead actors in many of his previous hit dramas. Here the director talks about the respective charms of six interesting actors, whom he has gathered for "Bad Man"; Kim Nam-gil, who has become one of the most sought-after stars after playing "Bi-dam" in MBC's "Queen Seon-deok"; Han Ga-in, who is making a comeback after a three-year hiatus; Oh Yun-soo, who gave a convincing portrayal of a married woman in MBC's "Bitter Sweet Life"; Kim Jae-wook who has a unique and exotic character; newcomer Jung So-min, who studied theater at Korea National University of Arts; and young actress Shim Eun-kyung who has proved her acting skills in many dramas and films.

About Kim Nam-gil :
Kim Nam-gil is an actor who gives off a vibe that is hard to define -- he is an intense actor, apart from good or bad. I think he possess an intense, primal image like the one Alain Delon showed when he was seducing women or sunbathing on a yacht in the film "Plein Soleil". I think he will do well in "Bad Man" since he pulled off Bi-dam, but the character Gun-wook [in "Bad Man"] will probably feel different from Bi-dam. When I was trying to come up with a title for the drama, I thought about how it would sound with the actor and I felt "Kim Nam-gil's "Bad Man"" sounded good together. He is not very muscular but he has a great physique, and I like how he looks and moves wearing a fit suit.

About Han Ga-in :
I heard that she got grades in school, and she really is smart and talks well. Jae-in is not a character that was often seen in previous dramas. There are some parts that hav been glamorized since a drama has to be liked by many viewers, but Jae-in is an extremely realistic and materialistic character, who shows a certain aspect of an average woman living in Seoul. To describe her in a crude way, she is from the north side of the [Han] river who dreams of making it to the Gangnam district and something happens in her life that lets her vent that desire. Up until now, Han Ga-in has had a very pretty and clean image, like a crystal, but she is working hard to transform her image in this drama and I am incredibly satisfied as a director. But she doesn't have to try so hard to be real, like wearing ugly clothes. (laugh) When we were shooting in Japan, she had a little injury where her eye rims got a little torn. It is an extremely sensitive thing for actresses to get injuries on their face, and I hadn't worked with her in the past so I didn't really know what to do. I approached her carefully, thinking she might be a little of high-maintenance type, but her first words were "I think we should shoot the scene quickly, it feels like it's going to swell up". So we shot her from the 45-degree angle to cover the injured side and finished the shoot. But the next day, she went to the hospital and in the evening, when we were filming a jogging scene with Jae-wook and Nam-gil, she showed up at the set with ice cream even though she didn't have any scenes to shoot. I was very grateful.

About Oh Yun-soo :
I have never worked with her but I always thought that she was a truly remarkable actress and wanted to work with her. Tae-ra is the eldest daughter in a conglomerate family who wed her husband in an arranged marriage, but she changes when she meets Gun-wook. They say that when a woman has an affair, she feels more apologetic toward her child than her husband, and so I think there will be a lot to show in her relationship with her daughter and many female viewers who are married will relate to her character. There is a slight age difference between Tae-ra and Gun-wook, but the story is very vulgar so she has to be attractive in a sexual way. But there are not many actresses in Korea who can play this part, and I thought Oh Yun-soo was the best out of them.

About Kim Jae-wook :
For the character Tae-sung, I actually wanted to find a new face rather than hiring a busy working actor. Kim Jae-wook appeared in "Coffee Prince" and "Antique" and also does modeling and music work. When I met him, he seemed very appealing and passionate so that is how we came to work together. Tae-sung is a son of a conglomerate family who is a little crazy, and Kim expresses that side incredibly well and he has a lot of charms. Unlike his image in previous dramas, he actually has an extremely masculine personality and he has gotten very close with Nam-gil, whom he really likes. (laugh) Of course, he gets along well with the actresses too.

About Jung So-min :
She is an actress who is making her debut through our drama. She is a junior at Korea National University of Arts, a great dancer and has a little experience in movies. I thought the part of Monet should be played someone who has a clean, innocent feeling and energy, and I like Jung So-min's pure face. There are many actors who undergo plastic surgery these days but I like her face, which doesn't look like it had surgery and has a certain young vibe.

About Shim Eun-kyung :
She appeared as a young Sujini in MBC TV series "The Legend" and starred as the main character in KBS' "My Dad Loves Trouble". She plays Moon Won-in, the younger sister of Han Ga-in's character Moon Jae-in. She was actually the first to be cast in "Bad Man" and although she is not the main character, I think she is a really good actress.

"The six actors of TV series "Bad Man""
by HanCinema is licensed under a Creative Commons Attribution-Share Alike 3.0 Unported License.
Based on a work from this source